Line rushes from the morning skate at the Scottrade Center:

All three goaltenders are still on the ice.

UPDATE: Martin Jones left the ice first and is the projected starter for tonight’s game.

-It looks like Frattin will once again be getting a look at left wing, where he showed promise during the preseason.

-Darryl Sutter is looking for more production from the third and fourth lines, hence the adjustments with Frattin and Toffoli flanking Stoll, and Lewis back at center alongside Clifford and Nolan.

-Most players are still on the ice, so we don’t have a firm indication of this yet, but based on line rushes today’s scratches appear to be Martinez, Carcillo and Fraser.

More to come after the players leave the ice… 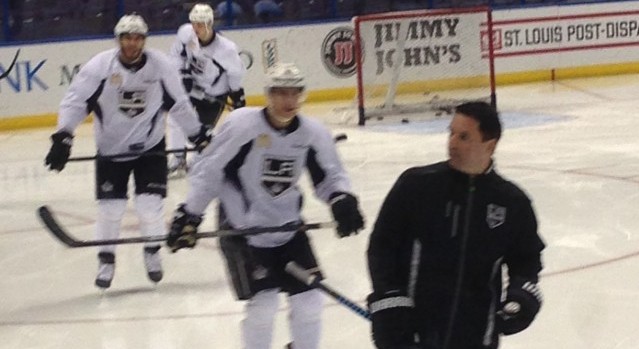