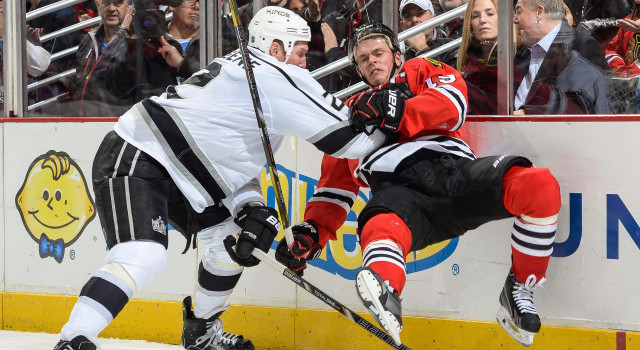 Matt Greene, on the game:
We have to come away with something from this game. That’s it. They get that goal in the first and we have to come back and get something. We’ve got to come out and have a better third. That’s it.

Greene, on the Chicago goal:
Just didn’t get enough of it. It was two-one. I have to get a better stick on that puck and that’s it. Gave them a second opportunity to score.

Greene, on the team’s effort:
We’ve got to get better. That’s it. We’ve got to beat these guys if we want to get out of the conference and we’ve got to start doing it right now. [Reporter: Compared to the last time you played them, it was more of your kind of game.] We want a win though. That’s it. We want to be able to establish our forecheck a little bit better and get things going up. We spent a little bit more time in our zone than we wanted to and that’s a testament to moving pucks better and playing better overall.

Mike Richards, on the game:
We had our chances. They had some chances. We just didn’t capitalize. I thought we had some good looks at the net. You can’t win in this league without scoring, it’s obvious. We just have to bear down on our chances. When you’re not scoring lots of goals you have to tighten it up defensively and I thought, for the most part, we did that tonight, other than the one two-on-one. They’re an opportunistic team, so it’s those little mistakes that cost you games when things aren’t going well.

Richards, on Los Angeles’ defensive play:
We didn’t give up too much. Like I said, the one two-on-one which probably shouldn’t have even been a goal if I would’ve got a stick on it right there or made a play it wouldn’t have been in the net. They have some skill players out there. We limited their speed. Joner made some big saves when he needed to, but we have to capitalize on the chances that we have and the power plays that we have. When things are going bad, it’s the little things that, I think, you make a mistake and it ends up in your net.

Richards, on the Chicago goal:
I’m not really sure to be honest with you. I just buried my head and was trying to backcheck and next thing I know the puck is right there and I don’t know if I missed it, hit it, he lifted my stick, but next thing I know it’s on his stick and it’s in the back of the net.