Before venturing any deeper, Mike Fisher’s game-winning goal was a good goal. There’s no controversy there. The in-camera replay – which was not available on the FOX Sports West broadcast – shows that the puck clearly crossed the goal line. Mike Richards took some heat for the developments leading up to the game-winner, and it appears as though he ventured too far from the center of the ice to the left wing to contend with Colin Wilson on the rush before realizing he needed to stay with Fisher. By the time he left the left wing, some time and space opened up as Drew Doughty realized there was a gap between him and Wilson. That allowed Wilson enough time to carry the puck deep into the Los Angeles zone before the immediate pressure arrived, and when he offered the puck towards the front of the goal mouth, Fisher found a spot adjacent to Richards where the Kings’ center wasn’t able to keep him from snapping a shot off the pass.

It’s going to be interesting to see how the Kings, a team that hasn’t suffered a real gut punch loss this year, will respond. The two Calgary losses were games in which the Kings allowed a game-winning goal in the final minute, though they hadn’t shared in the elation of having tied the game immediately prior. Last season the Kings went 11-3-0 after dropping the afternoon game in Detroit on February 10 in which they tied the game with 53 seconds remaining before Jonathan Ericsson’s shot from the right side trickled past Jonathan Quick with five seconds on the clock. After a pair of mettle-testing defeats in St. Louis in the first two playoff games last season, the Kings rattled off six consecutive postseason wins. It’s not only Darryl Sutter’s Park and Ride mentality that will need to remain constant for this grounded team; the Kings will need superior performances to the one offered in last night’s loss for the remainder of a challenging road trip that will place them in Chicago, Dallas and St. Louis over a span of four nights. 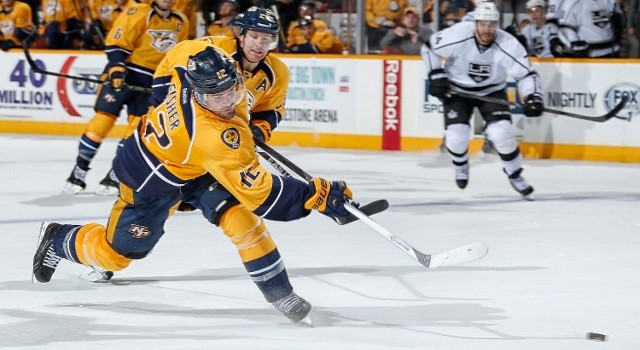 Anze Kopitar outstanding defensive performance? Check. With the level of play that he has established this season, it’s almost more surprising when he doesn’t offer the level of play that he offered in last night’s loss. Between his power play snipe, his instant recognition of a wide open Jeff Carter for the late game-tying goal, and his worthy-of-Selke-consideration defensive reads – he broke up a pair of three-on-two breaks, with his stick lift to strip the puck from Patric Hornqvist in the third period serving as the most impressive – the Kings’ top center was at the peak of his game on Saturday night.

After Ben Scrivens was awfully good for 56 minutes, he’d probably like to have mulligan for the final four minutes of the game. He wasn’t exactly helped out by an exhausted Los Angeles penalty kill leaving the ice for a desperate line change, which was followed by Mike Fisher demonstrating his savvy transitional skills by navigating a wide seam and blasting a shot past the Kings goaltender, who may have slightly been off his angle. Scrivens had also made a few saves more difficult than the one that barely snuck past him for the game-winning goal – his pad saves during the Kings’ 5-on-3 kill come to mind – though on a quick release from close range in the game’s deciding moment, that goal isn’t as much on him as the defensive detail in front of him. As Anze Kopitar told Lisa Dillman, “Two goals that obviously ended up hurting us … in two unlike-us mistakes.”

Last night’s game helped to reinforce the case that the Kings are taking an alarming amount of minor penalties. The Predators generated five power plays last night, including a five-on-three that the Kings eventually killed off and appeared to build some momentum from. The Kings have now afforded their opposition at least four power plays in eight of 12 December games. An offensive zone penalty by Tyler Toffoli helped set the stage for the game’s final, frantic moments, and was one of five power plays yielded to the opposition. The Kings’ 174 minor penalties represent the third-highest minor penalty haul in the league. The teams in their immediate company, beginning with the sixth-highest minor penalty tally, are Edmonton, Toronto, Winnipeg, Philadelphia and Ottawa. 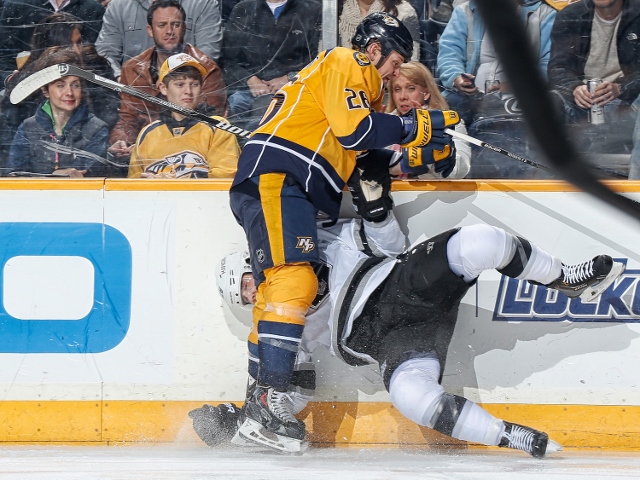