Brown: “I’ve never been that sick” 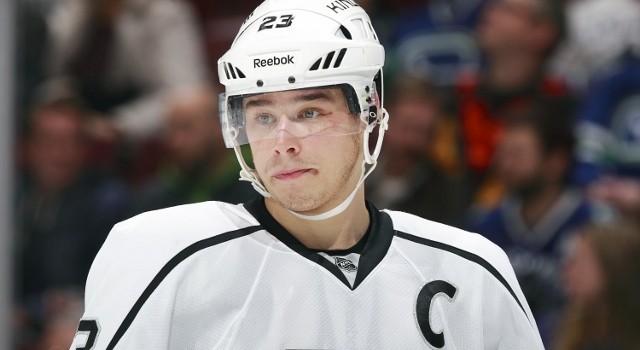 For roughly seven hours early in the morning of Monday, December 23, Dustin Brown was in an awfully uncomfortable place as he bore the brunt of a debilitating stomach ailment that kept him near the toilet and away from his teammates, who were preparing for the Dallas Stars in the final game before the CBA-mandated Christmas break.

He still doesn’t know if it was a virus, food poisoning, or the stomach flu, or some other gastrointestinal ailment, but from 1:30 to 8:30 Monday morning, Brown was unable to hold down any liquids and claimed to have lost 13 pounds over the first 24 hours of his sickness.

Brown didn’t skate on Monday morning and realistically wasn’t in any shape to play that evening against Dallas.

“I talked to Kinger (Head Athletic Trainer Chris Kingsley) on the phone – I can’t remember what time it was. Maybe three [in the afternoon],” he said “At that point, I was still in bed. I was actually starting to feel better, like I hadn’t thrown up or anything for like maybe six or seven hours at that point. At that point, I had maybe a Gatorade.”

Though his illness did not require a hospital visit, Brown remained home and missed that evening’s 5-2 loss to the Stars at STAPLES Center. A father of young children, he was relieved that the illness was not passed through the household.

“That’s the blessing right there,” he said. “Me being sick is one thing. Having a five year old, or a four year old to have that, it’s not good.”

Stating that “I’ve never been that sick” and crediting Gatorade for helping him regain the weight he had lost, a mostly recovered Brown acknowledged that he hasn’t had a full meal since he fell ill. And that, of course, made the first practice back after the Christmas break all the more challenging.

“Today was tough, but I think today was tough for everyone, just because with three days off, it’s hard coming off that,” he said. “I’m hoping to just get a meal in. I’m going to force a meal down tonight, because I need to. Hopefully that’ll give me energy, plus sleep. I’ve been sleeping pretty solid, too, just because I have no energy. I think the food’s the most important thing tonight.”

Brown is expected to play in Saturday’s game against the Predators, even if Sutter appeared to show some apprehension towards the forward’s physical state.

“He hadn’t skated for six days, really, when you think about it,” the coach said.

During Friday’s practice, Brown was aligned opposite Justin Williams on a line centered by Jarret Stoll – a familiar grouping.

Brown hopes that the time he spent on the ice today will help him work up an appetite and build his energy for Saturday’s game.

“My first few minutes out there were tough. The problem now is that I haven’t eaten since then,” Brown said, noting that he hasn’t had any sort of appetite.

“I think I’ve had combined, maybe half of a real meal spread out over the last few days.”