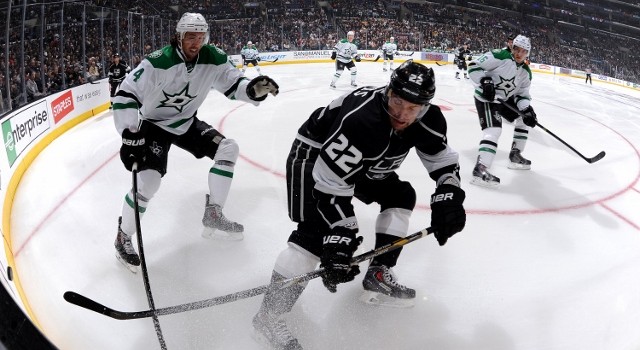 Martin Jones, on the Dallas goals:
The first one, just a pass in front and got it off pretty quick, and the second one, just a backhand short side. You can’t spot a team like that two goals early. It’s pretty tough to win when you do that.

Jones, on if it will be tougher now that teams have studied him:
There’s no secrets with how much video there is in the league. Every time I play it’s a little more experience, which can only help me out.

Jones, on whether he was thinking about his undefeated streak:
It’s one game. I mean it sucks to lose, but it’s one game and we’ve got a busy schedule after Christmas. We have to make sure that we’re ready to go.

Jones, on if it is nice to have a break over Christmas:
It’s a good first half, but it’ll be nice to get away from hockey for a couple days and recharge a little bit and get ready to go when we get back

Jones, on the past month:
Like I said before, it’s been a good start but I don’t want to stop here. I want to make sure I keep working and doing the things that have made me successful and keep trying to get better here.

Jones, on if there is any fatigue over the recent schedule:
I feel pretty good. It’s been busy but it hasn’t been too bad, only the one or two back-to-backs that we’ve had. It’s been fine. It’ll be nice to get away from hockey for a little bit and regroup that way, but physically it’s been okay.

Lewis, on the challenges provided by Dallas’ top line:
They’re good players, skilled, fast. You’ve got to take away time and space on ‘em and make sure you play hard on ‘em, so I don’t think we did a very good job of that tonight. Like I said, we’ve got to reset and come back and play like we know how.

Lewis, on going into the Christmas break with a loss:
I mean, it’s tough. You never want to lose the last game before a long break. You’ve got a lot of time to think about it. You’ve got to go in, get a good Christmas in, and see some family and friends and then come back and be ready to work again.

Lewis, on whether the team has dealt with fatigue while playing eight games over two weeks:
I think it’ll be nice to get a little break here for everyone to rest their bodies and maybe rest the minds a little bit. We’ve just got to take it and come back.