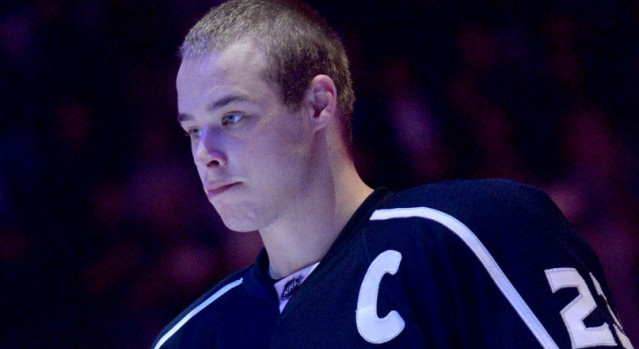 Dustin Brown was assessed a five-minute kneeing major and a game misconduct for a knee-on-knee collision with Tomas Hertl that took the San Jose forward out of the game.

The severity of Hertl’s injury was unknown immediately following the game.

“We haven’t even gotten to see the trainers yet, or talk to the doctors,” Todd McLelland said. “Obviously he didn’t return, so that isn’t a good thing.”

On a review of the play, it was Brown’s back leg, not his lead leg, that made contact with Hertl. Though Brown plays an edgy, physical role for the club and is the only King to have been suspended since the formation of the Department of Player Safety in the summer of 2011, this contact appeared to be purely a coincidental collision of two legs occupying the same spot at the same time, and a five minute major did not appear to justified.

“I’m sure you guys saw it up there. What did you guys think of it?”

McLellan deferred to the league when asked for his own assessment of the play.

“You know what, it’s in the – whatever we call it – the league’s safety commission. Whatever it is, they’re going to deal with it now. Let’s leave it there.”

Said Joe Pavelski, “It happened really fast obviously, in front of our bench. There’s an injury on it. It’s a tough play. I think it’s pretty late, but until you see the video I’m not going to make a comment on it. We have to do a better job on the three minutes of power play.”

For Greg Wyshynski’s reaction to the hit on Puck Daddy, click here.