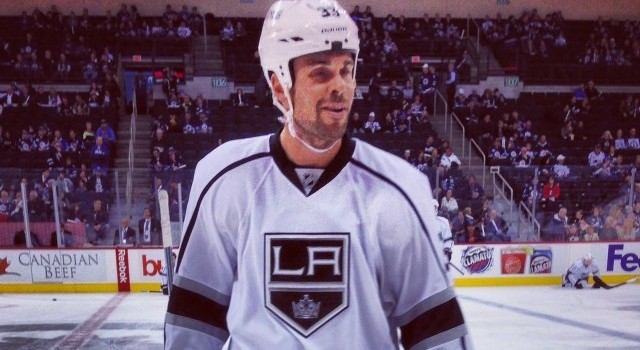 The Los Angeles Kings held an optional practice Wednesday morning at Toyota Sports Center. Defenseman Willie Mitchell, who suffered an upper-body injury in Saturday’s 5-2 win over Ottawa, returned to the ice for the first time since he weathered a hit from Senators forward Chris Neil late in the first period. Mitchell played in the second period and attempted to return from the injury, which was not a concussion, but did not participate in the third period of that game or subsequent games against Chicago and Edmonton.

On Wednesday, he spoke to reporters about his progress, as well as what he has seen from goaltender Martin Jones.

On his rehabilitation:
Good. I had a good skate out there, so it was good. It’s really encouraging. Hopefully tomorrow it’ll just keep progressing. [Reporter: Is pain tolerance the main issue?] I think so. Obviously, I got injured last game and went back out there and played for a period. I was trying to play because I didn’t want my mates there, my defensemen, logging too much ice time. It’s kind of a fine line between doing that and then also being a liability. You don’t want to be a liability either. If you can’t play because you don’t have the strength or battle and doing all those things you do as a defenseman, then I don’t want to be on the ice doing that either. That’s why I decided it was time to leave. The last couple days, it’s just getting a little bit of rest and I’ll hopefully be right back at it.

On whether he has felt better every day since the injury:
Like most injuries it’s time and then just getting back out there and doing it. Today, like I said, was a great step as far as going through things and figuring out what you can and can’t do. There’s a few things in practice that would always hurt. Then you get in the game and the adrenaline gets going and it kind of goes away a little bit too. It’ll be exciting to progress tomorrow and hopefully get back at it really soon. [Reporter: Is this your first time on the ice since then?] Yeah, it’s only been a couple days. It was good. It was much better than I thought, hopefully it’ll keep progressing.

On what has impressed him about Martin Jones:
He’s from Vancouver. He’s been on quality ice his whole life. His father runs Rogers [Arena] in Vancouver. Just his composure and all goalies are different styles of goalies, for the most part. He just seems to be in the right place at the right time and the puck hits and he really looks efficient – I guess is the word for it – in net. I said he reminds me of Schneider a little bit, who was in Vancouver and who’s in Jersey now. Moves fairly well, compact, squares up, good angles, the puck hits him, that’s the first thing as far as style. Then I guess the second thing is he’s been very, very, very good at making timely saves. Saves at the right time, last night’s game on Hall. Then, I don’t know who it was- I think it was Hall again in the slot there- he made a couple nice moves get in the middle of the ice and he made a big stop in the middle. That allowed us to get the second goal which gave us a little bit of breathing room. That’s what it’s about, making the right saves at the right time. He’s made a lot of those in the games he’s played and there’s a calmness about him back there, which for a young guy, is huge. And he’s from Vancouver.

On if he knew Jones in Vancouver:
Yeah we skated, everyone in Vancouver goes out and skates at the University of British Columbia there, so we skated there together. We’ve been on the ice a few times, that’s for sure.

On Jones’ subdued reaction to his first win in Anaheim:
That’s his demeanor. I’m sure inside there’s a lot of it there, but we’re all different people and we show it different ways. He cracked more of a smile than he normally has on his face. He was happy, he was really happy. I know that. We were all happy for him. You remember those moments, and quite frankly I think we all relive it when that happens to good people. It’s a long journey to get to that point. There’s a lot of bus rides, there’s a lot of sacrifices you make. While friends of yours are going on, driving their cars, or doing whatever they are because they already have their jobs. You don’t have a job, because you can’t, because you have to focus on your career playing hockey. That’s what it’s all about. Making all those sacrifices to finally get the chance to play in the NHL, and then not only play in the NHL, but get your first win. I think everyone sees that and knows how special the moment was for each of us who are regulars in the NHL now. To see that for a young guy, you’re just really happy for him because it brings you back to that moment and you know how special it was.