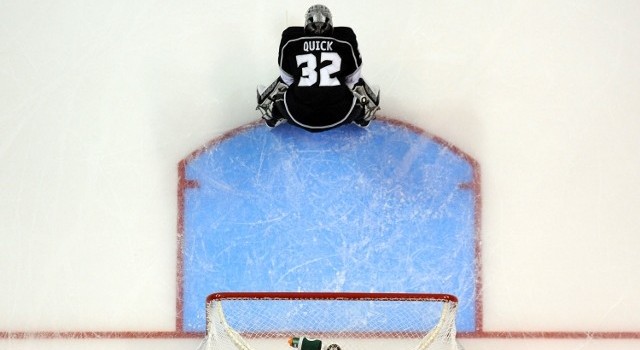 Five weeks ago today, Jonathan Quick suffered a Grade 2 groin strain in overtime of an eventual 3-2 shootout loss to the Buffalo Sabres.

“I think it was a shot that got tipped, if I remember. You kick your leg out,” he said Tuesday. “It’s a motion and a save that I’ve done thousand of times, and it didn’t turn into an injury.”

In his absence, goaltenders Ben Scrivens and Martin Jones have combined to post an 11-2-3 record with a 1.42 goals against average and a .952 save percentage in the 16 games that followed the one in which Quick was injured. In those 16 games, the Kings have allowed 23 goals, not including those surrendered in the shootout.

After skating multiple times while the team was on its recent road trip, Quick faced shots following the team’s morning skate on Tuesday and discussed his rehabilitation progress with LA Kings Insider, the LA Times and NHL.com.

Quick, on his progress:
Obviously the first few weeks, you kind of feel like you’re not making any progress, and then I think the last few weeks…every day seems to feel better than the day before. It’s all good signs. I’ve still got a lot of work to do. You just come in and try to make the most of every day until you can get back and play again.

Quick, on returning to the ice:
Every day has been a little more intense, as far as workload and trying to [find] a little more movement, and obviously today was a little more challenging than yesterday. As long as every day, you keep feeling better and better, we’ll keep trying to challenge it a little more. Obviously the most important thing is doing what’s smart and not having any setbacks. So I think the trainers and coaches, myself, we’re all on the same page as to what we expect every day. Just kind of keep working, keep pushing.

Quick, on whether there are daily challenges with the injury:
Well, not really, just because the injury and the location of it, everyday things, I never feel it. Maybe the first week or two off the injury it’s sore, but at this point I don’t feel it unless I do certain things. We’re trying to do drills and workouts based around not putting your body in that position. Every day I feel like you’re getting a little bit more range of motion, and when you do feel the pain, it’s becoming more and more tolerable. So we’re just going to keep working at it until you don’t feel anything.

Quick, on what he remembers from the play in which he was injured:
I think that particular night it was a little colder than normal in the rink, especially playing in California, your home rink, it’s not usually that cold. And then on top of it, going in, I think I had maybe seven shots going into the third period, and it’s not even seven shots where they’re spending time but they’re just not getting chances. They just weren’t in our end too often. You’re trying to stay loose and limber, but…two, two and a half hours, three hours where you’ve only seen seven shots or whatever, and then you go to make a movement that normally would never give you an issue. You stretch out, you put a little weight on it, and you kind of just feel a pop…I tried to finish the play and see if it was just a temporary thing that would go away, but unfortunately it didn’t.

Quick, on whether he immediately understood the severity of the injury:
I knew right when I did it I messed something up. I just didn’t know how bad it was, the severity of it. And then I think we took the puck and started going up ice, so I didn’t want to stop the play. And then they ended up turning around and coming back our way. I was lucky that it was kind of a nothing shot that they got on net, or it might have even been going wide there. That’s the way it goes. It’s a part of the game.

Quick, on the quality minutes provided by Ben Scrivens and Martin Jones:
They’ve been great. Scrivvs and Jonesy have both stepped in and played spectacularly. It’s nothing short of that. Every night we have a chance to win. The nights where they’re getting a lot of work, they’re making saves and the nights where you don’t get as much of work, they’re making the timely saves, which as we all know, those games where you get 17 shots, 15 shots, those are more difficult sometimes. They’ve done a great job, and the team has done a great job on the road, winning in some tough buildings. Obviously it’s great to see, but it’s tough to watch, too, at the same time, because you want to be a part of it. This is the first time in my career where I’ve sat out and watched. Well, I missed one for the birth of my daughter a few years ago, but besides that, I’ve never sat and watched a game. It’s difficult in that sense, but it’s a little bit better that we’re winning, playing well and climbing standings. At the same time, it just gives you a little more motivation. You want to get out there, and you want to get going. You want to play.

Quick, on spending more time at home:
My wife loves it. Helping out around the house. With the holiday season here, we’re kind of getting the house ready with that. A lot more family time than you’re accustomed to this time of year, so it’s good. 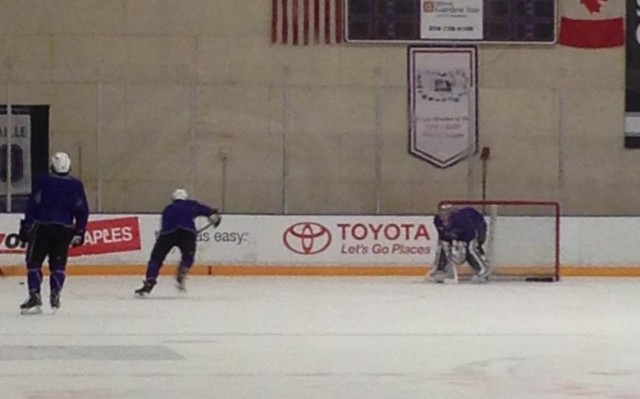