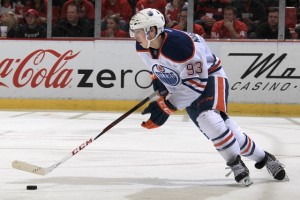 DETROIT, MI – FEBRUARY 09: Ryan Nugent-Hopkins #93 of the Edmonton Oilers turns up ice with the puck during a NHL game against the Detroit Red Wings at Joe Louis Arena on February 9, 2013 in Detroit, The Wings defeated the Oilers 2-1 Michigan. (Photo by Dave Reginek/NHLI via Getty Images)

By LA Kings
275 Comments
Kings of the Podcast