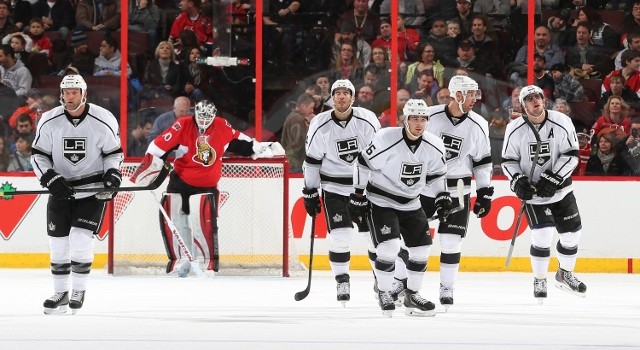 On whether the team let up after a strong start:
Not really. I think our big guys had a really good first period, and their big guys got going in the second.

On whether there’s good balance between the forward lines:
I liked two lines tonight. [Reporter: What were those two lines?] Kopitar and one of the other ones. There’s only four.

On allowing two goals or less in 18 consecutive games:
When you lose, you usually give up more than two goals, so it’s not that hard to figure out.

On the keys to facing Chicago on Sunday:
Get there on time. Beat the weather. Get through customs.

On Trevor Lewis’ performance:
I thought the line had a hard time. It’s hard. Lewie hasn’t played in a while. We put him at center. It’s hard replacing Fras. Fras has done a good job for us lately.

On Willie Mitchell attempting to play in the second period, and his status:
Yeah, he played in the second. He’s dinged up a little, and I just thought he couldn’t help us.