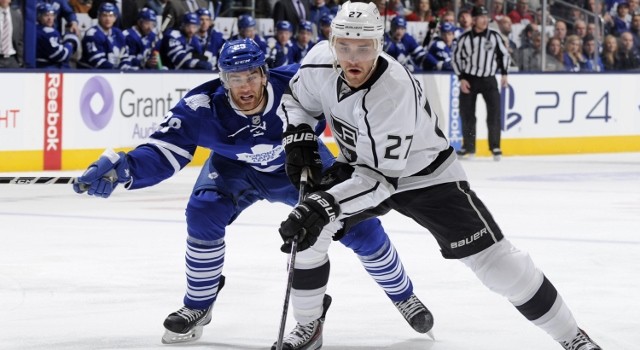 On whether the “park and ride” mentality is leading to road wins:
Well, tonight was obviously different than last night. We didn’t have much energy, and traveled a long day the day before and played last night. Late night. Just got to find a way.

On finding a way to win:
We got big goals. A power play goal, and Jeff’s got to score for us. Hopefully he’s getting in the groove again. Then the kids and Mike scored a big goal.

On Justin Williams’ performance:
I didn’;t really break it down into that. Once Fras got out, we just tried to use everybody.

On Colin Fraser’s status:
Yeah…he obviously got his bell run. We don’t really know much yet.

On receiving goaltending in an “open” game:
You know what? He was good in the first in the second, and he was sort of like our team in the third. He had a little bit of fatigue, and he just kind of made a couple saves for us.

On the expectations he had for Martin Jones prior to his first start in Anaheim:
Win. That’s what they’re supposed to do.