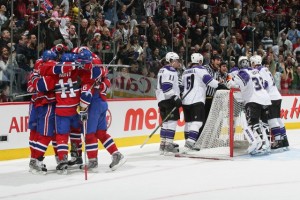 MONTREAL – JANUARY 31: Saku Koivu #11 of the Montreal Canadiens celebrates the game winning goal with teammates as members of the Los Angeles Kings discuss the play with referees at the Bell Centre on January 31, 2009 in Montreal, Quebec, Canada. (Photo by Andre Ringuette/NHLI via Getty Images) *** Local Caption *** Saku Koivu

The LA Kings have re-signed defenseman Austin Strand to a one-year, two-way contract extension, carrying an AAV of $771,750 at

By Zach Dooley
208 Comments
Looking to the Future

By Zach Dooley
343 Comments
Behind the Scenes