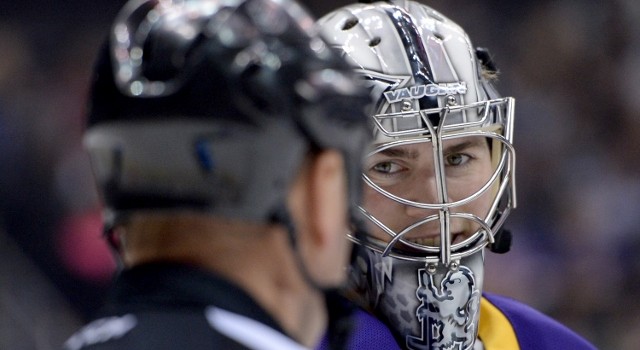 On wins in his first two games:
It’s good. I mean, any time you win it’s a good feeling. It wasn’t a ton of work early, but they had some zone time, so I was able to get into the game, and I thought we got better as the game went on.

On the team chanting his name as he returned to the room:
The guys have been awesome since I’ve been up here. It’s a great group of guys, and I’m happy to be able to get a couple of wins for ‘em.

On when he learned he would be starting today:
Late today. I had to prepare either way, and I was able to prepare for the start of the game.

On what the team has to do to win games on the road trip:
I think we can get better. I don’t think that was our best game today, but we did a lot of little things right, and I thought we were really good in front of our net. Any time there was a scramble or loose puck, we did a good job of picking up sticks and clearing bodies.

On his first two NHL games:
It’s been a good start, but I’m not here to win two games. There’s a lot of work ahead, and I don’t want to stop now. I want to keep on building off this and keep continuing to get better.

On the team’s defense:
It’s great. Like I said before, we did such a great job in front of the net today picking up sticks and clearing bodies. It makes my job a lot easier. It’s easier to play with confidence when you’re behind these guys.