Martin Jones: “It was a fun game to play in” 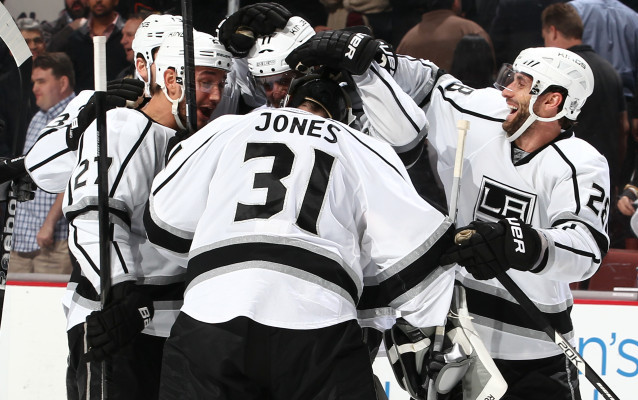 On his first NHL win:
It was an exciting time obviously. I was happy with the result, but it’s back to work today. We’ve got big games coming up here, so it’s right back to work.

On the phone calls and texts he received after the game:
I got a bunch that night from back home the next morning from the guys in Manch. It was lots of friends and family watching, which was great. Like I said, it was exciting, but right back to focus here. [Reporter: can you share what your folks had to say?] They were just happy and excited. I think my mom was a little bit relieved, she was pretty nervous there. It was exciting. It’s something I’ve worked towards for a long time, so it’s nice to get that one.

On friends and family staying up late to watch the game:
Yeah. Some of the boys back in Manch I think were up. It was a fun game and it’s nice to get it out of the way and move on from here.

On facing Teemu Selanne in the shootout:
I definitely knew it was him. The crowd made sure I knew. It was pretty loud in there. I just wanted to make that save, honestly. I wanted to keep the guys in it. I knew we were going to get one eventually. It’s pretty exciting getting to face a guy like that who’s a future Hall of Famer. It was exciting for sure. [Reporter: Can you remember it ever going through your mind that this is a Hall of Famer at that moment or is it out of your mind?] I tried not to think about that. I think a lot of that stuff hits you after the fact and after the game it kind of sinks in a little bit more.

On the longest shootout he’s been in:
I think I had one in Calgary that was like 12 or 13 rounds but that was one of the longer ones for sure. [Reporter: Did you win?] Yeah, we won that.

On playing in a Kings-Ducks game:
It was exciting. We had some good support there from the L.A. fans as well. It was a fun game to play in. The tempo was high and it was easy to stay in it, even though it wasn’t a ton of work early. With that kind of atmosphere it’s easy to stay in the game.