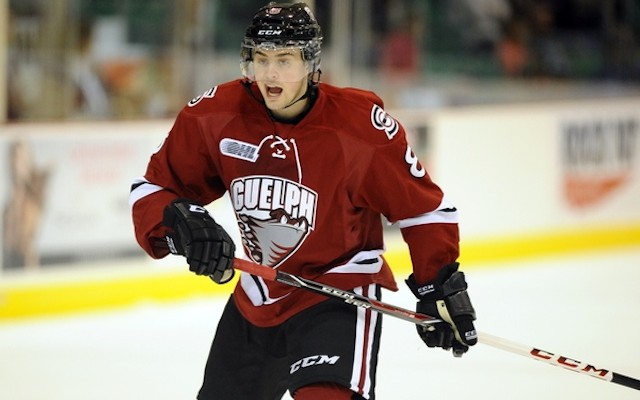 When looking at offensive production in the Ontario Hockey League, there has been the Guelph Storm, the Erie Otters, a wide gap, and then the other 18 teams in the league.

At 20-5-2-1 and 144 goals scored through 28 games – an astounding average of 5.14 goals per game – Guelph’s numbers are challenged only by Erie, who lead the Storm by four points in the extraordinarily competitive Midwest Division. Erie has potted 132 goals thus far; two OHL teams are tied for third with 111 goals scored.

Nine players have recorded at least 20 points for Guelph, with Los Angeles Kings prospect Zac Leslie ranking second on the team’s blue line with 22 points (8-14=22) in 20 games. It’s an impressive collection of offense – and one that shouldn’t be hurt by Justin Auger’s return and acclimation to the lineup. Auger, a fourth round selection by the Kings in 2013, missed 15 games early in the season after being diagnosed with mononucleosis; through 13 games, the 6-foot-7 right wing has four goals and six points.

In the pre-Thanksgiving week, Leslie became the first OHL defenseman to capture the league’s Player of the Week award this season after recording 10 points on six goals and four assists to go along with a league-high plus-minus rating of plus-9 over the time span. Four of his six goals were recorded in a 6-2 road win over the Plymouth Whalers.

Leslie, selected by Los Angeles in the sixth round, 178th overall, in the 2013 NHL Draft, continued the run of impressive play that made him an intriguing presence at development camp and training camp.

“I went back and watched him a maybe a month ago – he was just coming back from shoulder surgery,” said Kings Assistant General Manager Rob Blake. “[He] played back-to-back games, played big minutes, and I think what he’s taken from the pro camp is how he competed. I think that’s one thing we all looked at was his compete level in those rookie games. He brings that at that same level, and obviously the offense that’s coming [last] weekend is a great example of that.

Blake said there is “quite a bit” of communication between the Kings and Leslie – as there is with all of the team’s draft prospects.

“Obviously with our picks, the ones we have in Guelph with him and Auger, and then some of the college kids, Nelson and I were back there. We watched Guelph play a couple times. Nels is in there quite a bit. I exchange texts with him and different things. We’re definitely monitoring those guys, and making sure everything’s on pace. It seems like they’re doing a good job.”

For recent analysis of Kings prospects, as well as an interview with Director of Amateur Scouting Mike Futa, visit HockeyProspect.com.