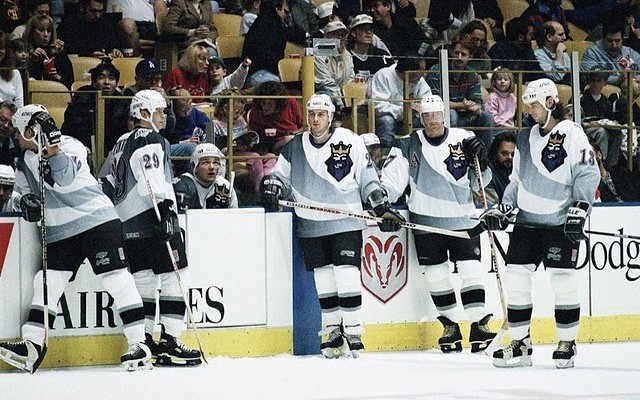 Less than two months away from the Kings-Ducks outdoor game at Dodger Stadium and following the revealing of the Kings’ jerseys at 9:00 a.m. Tuesday morning, FOX Sports West will broadcast a collection of “classic” L.A.-Anaheim games, beginning at 7:30 p.m. on Wednesday night.

The five games that FOX Sports West will broadcast are:

Wednesday December 4, 7:30 p.m.
-The January 27, 1996 game that featured both teams unveiling their oft-maligned third jerseys. It wasn’t the Kings’ 5-4 win that endured; it was the sight of Wayne Gretzky sporting the “Burger King” look. Gretzky, Dmitri Khristich, Jari Kurri, Marty McSorley and John Slaney scored for L.A. in the win. The game will also air on December 24 at 3:00 p.m. FOX and the teams are asking fans to use the hashtag #JerseyClassic when discussing this game on social media.

Tuesday, December 24, 7:00 p.m.
-Rookie Anze Kopitar made his Kings debut and scored his first two NHL goals in a 4-3 loss to the Ducks on October 6, 2006. Lubomir Visnovsky also scored for L.A.

Tuesday, December 24, 9:00 p.m.
-In the inaugural meeting between the teams on December 2 1993, Luc Robitaille recorded a goal and an assist to lead the Kings to a 3-2 win over the Ducks at the Great Western Forum. Jari Kurri also scored twice for L.A. This game will also air on January 24 at 7:30 p.m.

Wednesday, January 22, 7:30 p.m.
-In one of the more bizarre games played between the two teams, Anaheim raced out to a 3-0 lead at home on January 22, 2003 before Los Angeles scored five consecutive goals and held a 5-3 lead with 10 minutes remaining in the game. The Ducks then scored three times in a 5:16 span to win a 6-5, momentum-dominated game. Brad Norton, Steve Heinze, Joe Corvo, Ziggy Palffy and Brad Chartrand scored for the Kings in the loss.

The Kings and Ducks will meet for the first time this season on Tuesday night, a 7:00 p.m. game that will represent the 29th consecutive game FOX Sports West has televised this season.