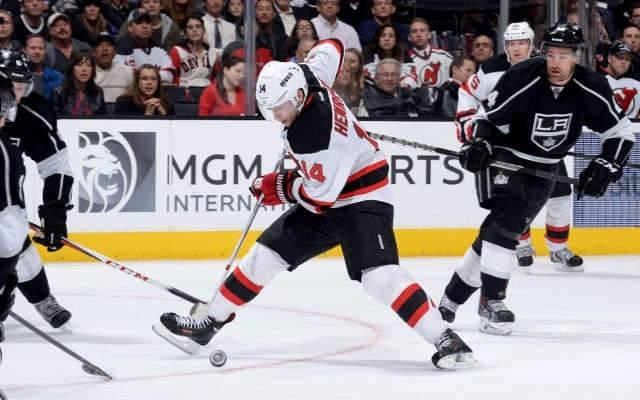 Peter DeBoer, on Cory Schneider’s performace:
I think it’s fair to call that one a goalie win, but we will take it. We know we have two great goaltenders and you expect one of those every once in a while. I was glad for Schneids, he’s been waiting for a win. We didn’t give him a lot of support early. I thought as the game went on in the second we got a little bit better. In the third we got a little bit better again. He basically took that one on himself.

DeBoer, on Jaromir Jagr:
Even the poise on the winning goal, I don’t know too many other players that would have had the patience to hold it and hold it that extra second. You can’t teach that. That’s why he is a Hall of Fame player and it’s amazing what he is doing at his age. The minutes we are loading him up with, the responsibility we are asking of him, he played against Kopitar’s line all night tonight. He’s been incredible.

Jaromir Jagr, on his stick being sent to the Hall of Fame:
I got to use it next game. It’s a pretty good stick actually. It’s pretty lucky with that stick.

Jagr, on getting the win:
Today I was probably more happy than the other night. We were outplayed, we were out [shot]. We shouldn’t be in the game but Cory was excellent. He kept us in the game, especially in the first period and we just couldn’t get the legs going. They are a pretty tough team, they don’t give you anything for free. So it was very tough for us. We should probably lose 5-0, but sometimes that’s what it is. My dad always said… when we lose the game and I said ‘Dad we played good’ and my dad always said ‘You are not a figure skater. You don’t get points for looking good. You got to score goals.’ So tonight feel more lucky. It was lucky for us, but we take it anyway.

Jagr, on his game-winning goal:
I got kind of the pass in behind, so I didn’t really even see the goalie. I didn’t see the net. I had a since of where is the net. That’s the move, hold it, hold it, hold it. But you always put it in top shelf but I am not that good so somehow it squeezes in. But it is the only thing that I had a chance, just out-patient the goalie and somehow put it in. But I didn’t really see the net to be honest with you.

Cory Schneider, on the win:
That was great. To get a big goal in the third, I was hoping to make it stand up, I felt that would be enough. Unfortunately gave right back about a minute later. We stuck with it, we didn’t get down on ourselves, we didn’t give up. The first two periods weren’t the way I think we drew it up, but give the guys credit the kept working and ultimately came away with a big win.

Schneider, on Jaromir Jagr:
He’s great. I wasn’t sure what to expect, but he has come in here and done nothing but work hard, set a great example. Positive, just really builds guys up when they are having a tough time or sometimes you might be afraid to play with a guy like that, but he is the exact opposite. He just sort of makes you feel like a better player and he makes guys better around him.