How Ben Scrivens “scammed the system” 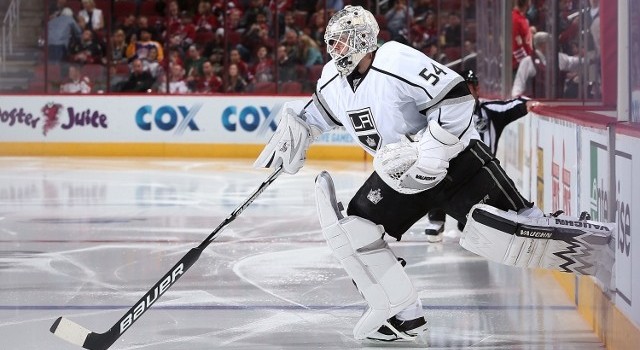 During the 2005-06 junior hockey season, a 19-year-old Ben Scrivens was en route to becoming the Spruce Grove Saints’ Most Valuable Player and earning an invite to play in the 2006 Viking Cup as an Alberta Junior Hockey League All-Star.

Prior to that season he had not been placed on the protected list of a major junior hockey team or invited to a major junior training camp, let alone having been selected in the Western Hockey League draft. That he wasn’t considering playing major junior more or less misses the point.

“It’s not that I never considered it,” Scrivens said. “It’s that no one in major junior hockey considered me.”

Though the 20-year-old junior hockey cutoff was gradually approaching, the Edmontonian still had a goal of playing collegiately – even if it wasn’t the most realistic scenario at the time.

“I kept telling my parents, ‘Oh, I’m going to try and get a scholarship,’ never thinking that would actually happen, and that was going to buy me two years before I actually went to college,” Scrivens said.

“That was my actual plan at the moment. It was a small white lie, not thinking that it would ever come to fruition, and it would buy me a little bit of time to shirk some responsibility.”

He was backstopped the AJHL North team that won the 2006 Viking Cup; one of his teammates on the title team was Columbus Blue Jackets forward Mark Letestu, while Trevor Lewis and New York Islanders forward Kyle Okposo played on the bronze medal-winning USA U-18 Selects squad.

The tournament provides NHL scouts and collegiate representatives prime scouting opportunities for unaffiliated players, and it wasn’t until several weeks after the December tournament had ended that Scrivens had realized that he had been identified by a Cornell University coach.

“I think he called our house, and my family’s notorious for not really listening to voicemails on our home phone. Probably about two weeks after he phoned and left a message saying who he was, and that he wanted to talk to me, we actually got the message,” Scrivens said. “I kind of panicked. I think I called him back as soon as I hung up the phone, hoping that it wasn’t too late, and he hadn’t taken this as a slight against him.”

“Things moved pretty quickly after that. I’m pretty sure within the first couple phone calls he had offered me a spot on the team. That was my first actual offer from a school. It was tough to beat the combination of academics and athletics, and so I jumped all over it, obviously.”

Even though he was selected to play for a premier ECAC team while studying at one of the country’s finest academic institutions, there were modest expectations of what he’d be able to contribute to a program that boasts two NCAA Championships and 12 ECAC Tournament titles.

“I never even anticipated playing there. I kind of thought that I scammed the system and got into an Ivy League school, and I might play 12 games my whole career at school, but I’d be able to tell my kids that I was a Division I athlete. That was my prediction going into the NCAA.”

Having just turned 20 years old when he arrived on campus, he gained experience in net during his freshman year before serving as the team’s primary starter in his sophomore, junior and senior seasons.

In his senior year of 2009-10, he won the Ken Dryden Trophy – named after a Cornell alumnus – as the ECAC’s Goaltender of the Year as part of a First Team All-American campaign. He was one of 10 finalists for the Hobey Baker Award.

Though he was never drafted to a WHL or NHL team, the Toronto Maple Leafs signed him to a one-year, entry level contract shortly after the conclusion of his senior season. One year later he was signed to a one-year, two-way contract, and then in the summer of 2012 he re-upped for two more years. That contract expires following the conclusion of the current season, and with each quality performance in net for the Los Angeles Kings, he’s continues to firm up his place in a league where there are only 60 open goalie spots.

“I was never drafted, I never got a letter,” Scrivens said. “I wasn’t even an afterthought for any major junior team, and I’m extremely fortunate for that, because I couldn’t have planned a better path for my career than what has actually happened.”