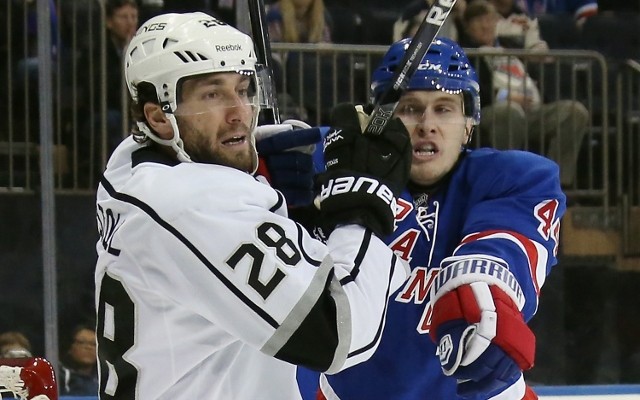 On Ben Scrivens being prepared to take advantage of his opportunity:
Well, I would think that if I was getting paid and making six or seven hundred thousand dollars to play in the National League that I’d be trying to earn it…You have to prove yourself. You don’t get something given to you in this league. Those guys earn their keep. It’s the difference between Scrivens and Jones. Actually, Jones has probably played more games total than Scrivens has. [You’ve] got to earn it. There are only 650 jobs in the world, in the whole world, to play in the National Hockey League. In goal, that means that there’s 60-to-70. There’s no big, magical system of forming it. You get the opportunity, you earn it. If you don’t, then somebody else gets it. It’s not that complicated, really. [Reporter: But it has to say something for him that he’s named the First Star in the entire league for the last week.] Yeah, good for him…He deserved it. I mean, if you have a couple shutouts and you save 95% of your shots, then you get that. It’s nice to see somebody on the west coast get recognized for it, right?

On whether there is any extra perk or recognition for of beating all three New York-area teams, with regards to the gravitation of hockey coverage in the Eastern Conference:
No. The Western Conference has had the last two Stanley Cups, and right now the teams that are in ninth or 10th place would be first or second in the east. It’s just the way it’s working after a quarter of the schedule. The best part about going to the Eastern Conference, or as you say, ‘The New York Area,’ is they’re close together once you get there.

On the Ben Scrivens narrative, and whether it draws more attention to the “west coast”:
It’s nice to see. It’s not the west coast of it. I mean, we’re in a conference that starts in Chicago. So that’s the Midwest, and there are four Canadian teams now in it. It’s not confined to California. I mean, we’re in a division that has three California teams, an Arizona team and three Canadian teams. So that’s unique.

On the travel ease of playing in the Eastern Conference:
Their division’s changed, too. You know, we played the Rangers last night, and there was some talk in the building because they played the night before [of] how hard that was. We were just finishing four-in-six…You know what? It’s all just part and parcel. We’ve talked about it for years. It didn’t make any difference last night. It makes zero difference. It doesn’t impact anything. You know what? Players are used to playing back-to-backs, players are well-trained, the nutrition, everything is spot on. Back-to-backs don’t affect players at all anymore. Where it impacts, clearly, as the season goes on and then come playoff time is you cut down miles, and get more recovery in their game, and then they become a little more effective. I remember just from my own is…that year that we played Tampa, and it went to Game 7 in the Final, and when they broke the mileage all out in it, what Tampa had to do in the playoffs and what we’d had to do in the playoffs was like – I have to look back – but it was like 50,000 to 5,000. Like, it was incredible. So that’s where it impacts your teams. You might not notice it until a Game 7, or your star player, where there are four or five players that play big minutes, that it impacts them on some nights. But you look at us – and everybody’s talking about Scrivens today – well, we won the game last night because Anze Kopitar was a dominant player, clearly. He took over the game. The goalie had to be solid, but he didn’t have to be a guy who stood on his head. Kopitar and that tells you the guy who plays big minutes in the league in a four-in-six situation – from behind the bench, it was a very impressive showing by Kopitar. [Reporter: Both ends?] That’s usually when he’s most impressive. [Reporter: Some of the New York reporters were raving about him on Twitter.] Quite honest, again, you guys are talking about Scrivens because you seem him as a backup and a lesser-like player, correct? But…it’s like I told the media after in New York. I said, ‘You guys don’t get to see Kopitar. You guys should see him live, and then you’ll know how good he is.’…I’m not interested in talking about a goalie because he had two or three good games. He better have 10 good games. I mean, it’s what he’s going to play. It doesn’t matter if the other guy washurt or not. IT’s what he was going to play. He better play well. Otherwise, somebody else plays. It’s not that hard to figure out. That’s no different than a kid who’s trying to be called up and play as a right winger or center or left winger. He’d be a third or fourth liner, scratch, or a sixth or seventh defenseman. Same as the goalie. Either you perform, or you don’t.

On what the younger players can gain team-wise from the road trip:
You get on long trips, you need four lines and six defensemen and two goalies. That was clear, and I don’t lump those guys together. You’ve got to make sure you don’t do that. They all play different positions, and clearly one player has outplayed the other two if you did it in a one-two-three order. So they’re all different. Quite honest, one of them last night was a game time decision whether I played him or not. Hopefully they learn something. [Reporter: With Vey – obvious question – is it great for him to be able to see Kopitar in person and watch him when the game is on the line in what’s needed to be done?] You learn in three different ways – we all do – by seeing it, by hearing it or doing it. SO hopefully he’s seeing it. It doesn’t matter if you’re a hockey player or whatever you are. That’s how you learn. Some of us are better in one way than another…In this environment, if a young player learns by seeing it better, than hearing about it or actually doing it, then good on him.