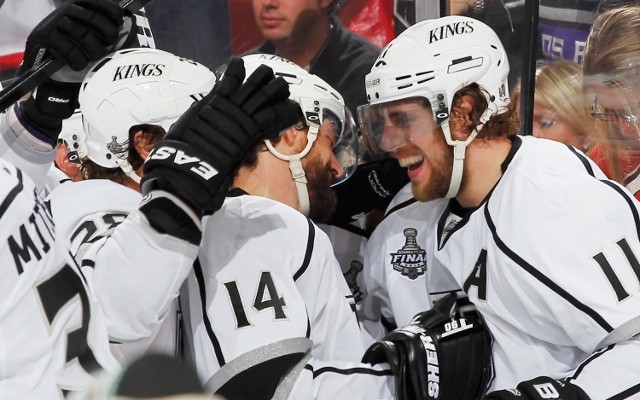 Tonight, the Kings will face the New Jersey Devils and return to the Prudential Center for the first time since the teams vied for the Stanley Cup two seasons ago. Overtime game-winning goals by Anze Kopitar and Jeff Carter allowed the Kings to surge out to a two-to-nothing series lead after a pair of games in Newark opened the franchise’s second trip to the Stanley Cup Final.

Though Jeff Carter isn’t available to talk about his Game Two overtime goal, I spoke with Anze Kopitar and Justin Williams to describe the setup of the breakaway game-winner in Game One, and whether there are any raised emotions heading into tonight’s game.

Anze Kopitar on how the breakaway developed:
We were in our zone, and the puck came around to the bench side. It was Drew that chipped it in, and Willie was just outside our zone, and I wanted to make sure I was in the middle and nobody was over top of me, so I yelled for the puck and Willie gave it to me right on the dot. It was actually funny, because I almost lost the puck going into their zone. I regrouped there and was able to put it in.

Kopitar, on the thought process of trying to score on an overtime breakaway:
You’re really just trying to finish the game. It was really hot, I remember. I talked to a couple guys on the bench. They were not feeling great. The cramps were coming in, so I just wanted to really finish it. This was the play that you don’t get too often, especially not in OT. I wanted to make sure I made it count.

Kopitar, on what he remembers about the celebration:
I think I jumped into the glass, and then Willie came and gave me a big bear hug. I remember Drew saying when he was skating up the ice he cramped up. But it was fun. It was definitely fun. Everybody came and we had a nice couple tunes going in the locker room. It was a good start.

Kopitar, on whether there’s any excitement to return to the Prudential Center:
Well, we lost the last game there. But it turned out good for us. It will be good memories, but we understand it’s a totally different position going in there right now, and we’ve got to play accordingly.

Justin Williams, on how the game-winner developed:
I remember being very tired, to be honest with you, in the overtime period. Late in the third, overtime, it was hot. So we were obviously trying to get a goal as quickly as possible. It’s what you do in overtime. The puck came up my boards, I remember, kind of on a broken play, and I felt the weak side D-man come over to me, so I took a chance to see if Kopi would be in that area. Fortunately he was. As a result, he got a huge goal for us.

Williams, on whether he remembered seeing Kopitar before passing him the puck:
I don’t remember seeing him, no, but sometimes as a hockey player you can just feel when people should be in a certain area. He wasn’t behind me when I was looking back at the net, so I took a chance that he would be in the middle of the ice. We’ve played with each other for a few years, so he knows that sometimes I’m going to make a play where I’m not exactly looking at him, and vice versa as well. That helps when you play with each other every now and then.