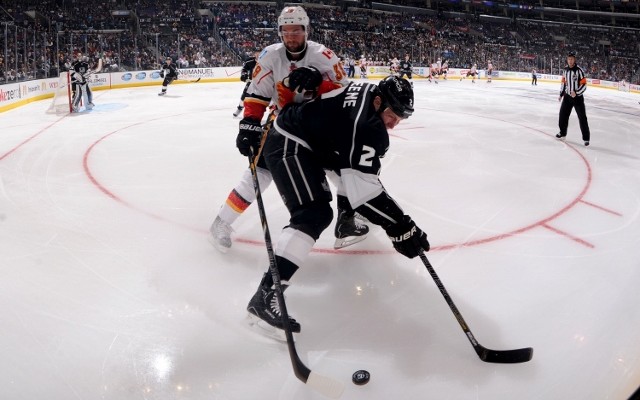 One week ago, Darryl Sutter was asked why Matt Greene wasn’t on the ice to practice with the team. He responded by saying, “Matt Greene’s banged up. It’s like Mystery Valley for me,” an attempted articulation of an unclear appraisal of a player in the process of being evaluated.

On Wednesday, Mystery Valley came into focus. Greene has an upper-body injury and will be bound for long-term injured reserve to free up cap and roster space to give the team financial flexibility needed to recall goaltender Martin Jones and left wing Tanner Pearson from AHL-Manchester, per Lisa Dillman of the LA Times.

Goaltender Jonathan Quick, who returned to Los Angeles to undergo evaluation, was not involved in today’s roster moves.

At this point, the severity of Quick’s injury is unknown.

“We’re not going to know until the MRI,” Lombardi told Dillman. “Obviously, it didn’t look good. The trainers told me walking out [last night] it was not good. They don’t know until they get in there and find out what it is … nobody knows.”

Clifford “got his bell rung,” in the first period of Saturday’s Vancouver game, per Sutter, a likely indication of a head injury.

The current injury binge will place plenty of focus on Ben Scrivens, who will be expected to absorb starting duties while Quick is sidelined.

Pearson will join former linemates Linden Vey and Tyler Toffoli on the parent club, though there is no current plan to reunite the trio. “I think Toffoli’s good with Mike Richards,” Sutter said Wednesday.

“Obviously it’s exciting for him. First time, other than the playoffs, getting called up,” Linden Vey said of Pearson.

“I think we showed that we can produce and play at a high level in the American League. Playing together, obviously, would be exciting, and hopefully we can do well at this level as well.”

Though the team’s depth will be tested during the process, the team could benefit from the return of Jarret Stoll to the lineup. Stoll missed the three previous games with an upper-body injury, per Sutter.

“I talked to him before we went on the ice,” Sutter said before the team traveled to Long Island on Wednesday. “He thinks he’s close, so we’ll just see what he’s like in the morning. I’m kind of leaning towards a hundred percent. He played last time, and it actually hurt our team because he played four or five minutes. Jarret’s going to say he’s ready, but that’s what he told me last time. That’s not a criticism. That’s cause he wanted to play. But we’re in a little bit of an injury situation. We can’t get into a shortened bench in a three-in-four here. You’re in trouble.”