It is good to be back in Buffalo, even if this visit may result in the release of some pent up frustration from my previous visit 10 years ago.

The only other time I set foot in this city, a heralded Austrian freshman named Thomas Vanek scored midway through overtime for the University of Minnesota on a pretty spin move-slash-wraparound in the semifinal of the 2003 Frozen Four, eliminating Al Montoya, Eric Nystrom and my Michigan Wolverines in the last game I witnessed as a college student. The game-winner came after Michigan had controlled play yet was unable to open up a lead representative of the discrepancy in scoring chances. A 2-0 Wolverines lead became a one-goal game heading into the third period, and then overtime, and then suddenly a quiet drive west through Southern Ontario carrying the disappointment that our final hockey game as college students wouldn’t be an NCAA Championship game in a filled NHL arena.

It was rainy when we arrived yesterday. For those eager to view another riveting landing, wait no longer:

We received less than half an inch of snow yesterday evening. It didn’t quite stick on the ground, though it did ice up some windshields and make the roads and sidewalks around the area slick last night.

The team is scheduled to hit the ice at 11:30 a.m. local time at the First Niagara Center. I’ll have a story on several players with Buffalo ties, as well as updates on players who did not make the trip. 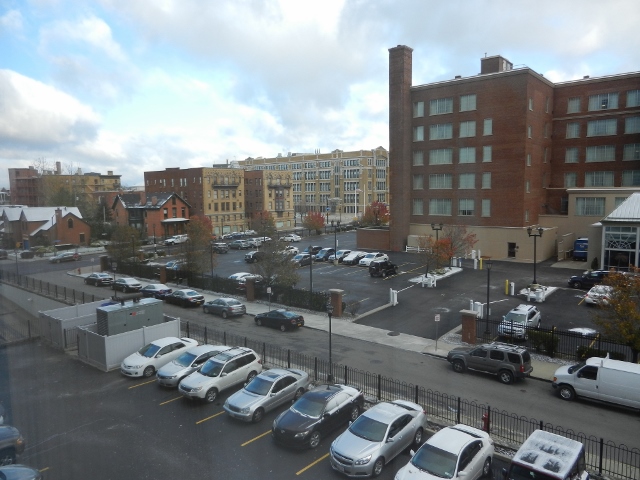