The Los Angeles Kings practiced at Toyota Sports Center Sunday morning for the final time before heading to the east coast for a four-game trip that opens Tuesday in Buffalo. The Kings will also visit the New York Islanders (Thursday), New Jersey Devils (Friday), and the New York Rangers (Sunday) before arriving back at LAX in the wee hours of the morning on Monday, November 18.

Jarret Stoll participated fully in practice, which makes him available to travel with the team Monday morning. More on his availability for the Buffalo game will be posted following Tuesday’s morning skate.

Jeff Carter, who is eligible to come off injured reserve, did not practice. He has recently been spotted at Toyota Sports Center and at Staples Center wearing a walking boot, so his availability for Tuesday’s game should be considered highly doubtful.

Neither Matt Greene nor Kyle Clifford took the ice. Regarding Clifford, Sutter said after the game that “he got his bell rung in the first period,” a dicey prognosis for the rugged power forward.

Should Los Angeles decide to recall a player from Manchester, Tanner Pearson would be considered the most likely forward target. In discussions late last month prior to Tyler Toffoli and Linden Vey joining the team, those in the Kings’ hockey operations expressed confidence that any combination of Pearson, Vey and Toffoli would be able to fill a role on the parent club if needed. Pearson, a left wing, fills a need at Clifford’s position, if not the same role. In 14 games this season, Pearson has 11 points (7-4=11), a plus-7 rating and 48 shots on goal. He was held without a point but took five shots in Saturday’s 3-2 win at St. John’s.

The need to recall a player from Manchester would be based on the continued evaluation of Clifford and Carter. If neither player is available for the three-games-in-four-nights stretch next weekend, it is much more likely that a move would be made. According to CapGeek, the Kings are just over $18,000 under the salary cap and would have to place a player on Long Term Injured Reserve or make a trade that increases the flexibility to bring a player up from the AHL. Pearson’s cap hit is $735,833.

The Kings are also down to six healthy defensemen on the roster and could turn to Jeff Schultz, Andrew Campbell or Andrew Bodnarchuk of the Monarchs if needed.

Barring any roster moves, updates on Stoll, Greene and Clifford will come from the First Niagara Center Tuesday morning. 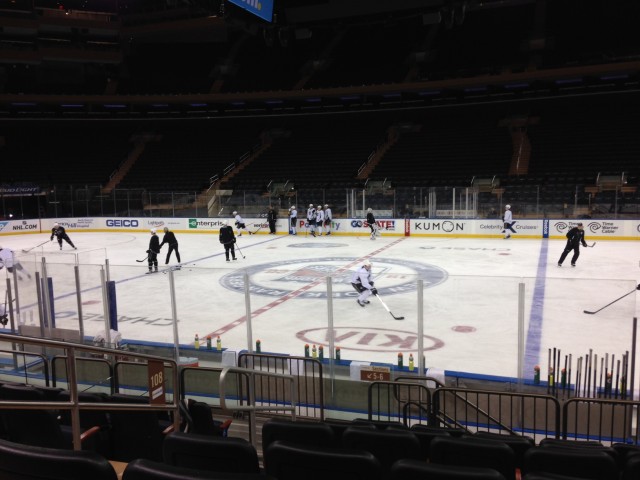