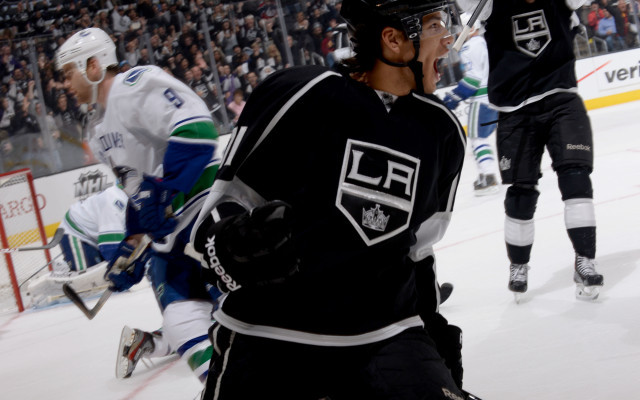 On the effort:
We were solid. Had a really good start against a team that a team that’s been playing really well. We put up a couple and preserved it.

On Vey and Toffoli:
I think both of them showed their offensive composure and ability to handle pucks under pressure. Tyler’s a shooter and Linden’s a playmaker and Linden made a good play on Jordy’s goal. Tyler, him and Mike, well that line was really good. It’s not so much Tyler. King and Richards were really good also.

On if he would like Toffoli and Vey to stay on the team:
Well we’re kind of right at the limit aren’t we? In terms of players, we need everybody we can that we can in terms of injuries.

On Clifford’s injury:
He got his bell run in the first period. It’s clear and everybody saw it.

On Alec Martinez:
He’s been fine. We want to move the puck and try and get involved shift to shift. Be involved in terms of staying focused and knowing how we want him to play. I mean we have six defensemen, so he’s got to play and he’s played well.

On the injured players going on the road trip:
You know what, Stoll, Jarret is skating. The other guys aren’t. So get through tomorrow and make a decision tomorrow.

On if he gets excited facing John Tortorella:
Not really. We’ve coached against each other enough. It’s not me against him. It’s a division game and quite honest, it’s really, really clear with the way the alignment is now… some teams you play three at home, two away. Some teams two and two. At the end of the year you’re going to look and see how you did in your division. Probably to see who makes the playoffs and who doesn’t.