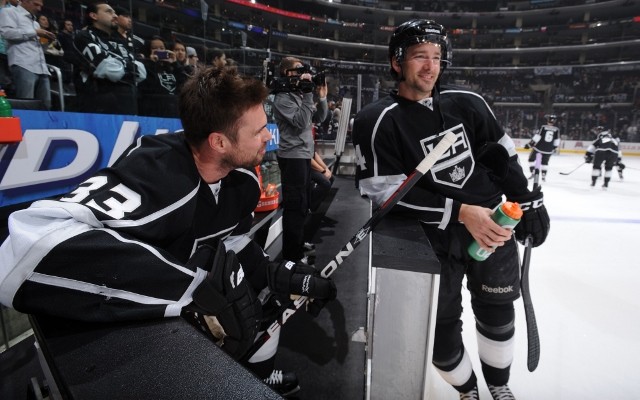 On the penalty kill:
In our game, when you work on the penalty killing, or special teams, power play is done on ice. Penalty killing is done off ice. It’s hard to practice penalty killing because you don’t want guys blocking shots in practice. So it’s more video and structure, and quite honest, the last six games we weren’t very happy with our penalty killing, and the first nine we were. The way the schedule worked, we had some time to work on it, and sort of reset and look at who we were using at certain times during the penalty kills. [Reporter: Pleased with the way it went tonight, though?] Well, they didn’t score, did they? So, what am I going to say? ‘I’m not happy with it?’

On Linden Vey’s performance:
We try and put him in opportunities to succeed. It was his first NHL game. We’ll give him that. [Reporter: How did he do?] I tried to put him in opportunities to succeed, so we put him on the power play and we used him on penalty killing, which was what we talked to him about this summer, and [we’ll] make some decisions on who plays Saturday.

On the Muzzin-Doughty pairing:
I think Drew was carrying a lot of mail tonight. His partner’s going to have to play a lot better.

On whether the shutout was a “team accomplishment”:
Absolutely. It’s our second one this year. Ben Scrivens had one in Florida against the Panthers. Shutouts are not individual things. I mean, they don’t throw no-hitters.

On Jonathan Quick implying that one-nothing and six-five wins were all the same, and that getting two points is the most important aspect:
Jonathan Quick’s a great competitor, and I imagine I would see it like that, because the goaltenders who have the best winning records are on the best teams. Jonathan Quick is – what is he now? Whatever his record is, he’ll take the wins.

On Alec Martinez:
We put him back in. He wants to play, so it’s no different than asking about other guys. They want to play. We’re in a tough division. Quite honest, if I’d have said after…16 [games], and we had 10 wins, I would’ve said that was good, and that tells you how tough it is.

On whether the team played “wire-to-wire with very little letdown”:
I don’t think there was much difference in the game. I think the toughest part of the game was the third period where there was like seven and ah half minutes to start without a whistle.

On Kopitar “shooting with success”:
I’ve never really had a problem with it…I think every time you’ve asked me, I’ve said he’s been our best player, and I think he is that again. I know, we’re in Los Angeles. Everything’s based on stars and what they do…I thought it was about winning. That’s what it’s about. Kopitar night in and night out gives you a chance to win.

On Saturday’s game against the Vancouver Canucks:
Tough team. Used to winning the division, and now they’re in a bigger division, and they’re trying to win it. So we’ve got our hands full. It’s a good rivalry. I’m looking forward to it.