After filling STAPLES Center to only 97.8% of capacity in a 2-1 win over Florida on December 3, 2011, the Los Angeles Kings have since sold out 76 consecutive regular season and playoff games to set a franchise record.

The previous record of 75 consecutive sellouts was set between December 8, 1990 and October 8, 1992, during the time colloquially known as the Wayne Gretzky Era.

“There are a lot of things that go into it,” Dustin Brown said. “I think one is the organization putting together a team that won a Cup, and it has a chance to win many more. That, I think, excites the fans. But then the other half of it is our fan base has been there. I mean, even my first year, when we weren’t a very good team, we would sell out against Phoenix, and they weren’t a very good team.”

A winning product certainly will certainly attract some of the newer and potentially more casual fans, but there’s also the broad spectrum of entertainment outlets in Los Angeles to consider. Though L.A. is a city with sports fans that are as passionate as any other, sports don’t necessarily play as central of a role in the city’s identity, nor are there limited options. Without the NFL, college football traditionally takes precedence in the fall, the Lakers are on center stage through much of the winter and spring, and the Dodgers are the boys of summer. The Clippers and Angels have also raised their scope, both with their in-game product and through the growth of their regional scope.

The Kings have built on an exceptionally loyal backing of fans that have followed the team since Long Beach Arena hosted the first National Hockey League game in Southern California on October 14, 1967.

“I think Kings fans, in general, are very supportive and come out every night. But to sell out every game, I think it’s part of the culture,” Brown said. “L.A. is a tough market. You’ve got to kind of earn your right to draw the fans. We’ve had a really good team here the last few years, and the fans have supported it.”

Drawing capacity crowds during October and November presents a challenge, not only because of the variety of sports being played throughout the fall, but because individual ticket sales have only had seven weeks to build up. Group sales that accumulate throughout the year make selling games out in February and March easier than selling out games in October and November.

Still, the nightly attendance of 18,118 remains constant. The Kings are expected to continue the sellout streak through the entirety of the 2013-14 season.

“Luc and his guys are working their butts off just to advertise around town,” Anze Kopitar said. “It makes it a little bit easier when you have 12 million people around here, but it’s definitely nice to see that people are interested here.”

According to information available on ESPN.com, four teams have sold out every home game since the 2004-05 lockout: the Montreal Canadiens, Toronto Maple Leafs, Calgary Flames and Vancouver Canucks. Amongst American markets, Pittsburgh and Philadelphia have the longest sellout streaks.

14 teams have sold out every game since the end of the lockout that delayed the start of the 2012-13 season.

“Well, it’s nice to see teams selling out. I think that’s more important,” Darryl Sutter said. “When you have a good team, that generally happens unless there’s a cost problem.”

Though the pre-Gretzky years didn’t exactly represent the zenith of the team’s attendance success – the average attendance of 12,620 during the 1974-75 season represented the highest average nightly rate prior to the arrival of number 99 – Sutter understood the loyalty of Kings fans during his playing days.

“It was good playing at The Forum. It was a pretty good place to play,” he said. “When we came here, it was always a good crowd – I thought it was. I certainly didn’t see it as a half-full place.”

“Good teams, people come and watch. That’s clear. So don’t get too caught up in it.” 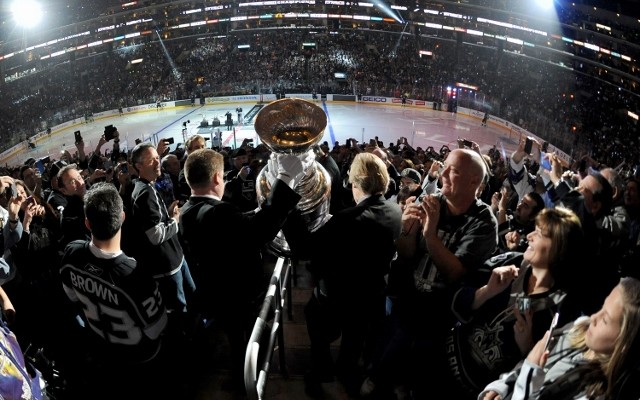