Scrivens to start; no other changes likely - LA Kings Insider

Scrivens to start; no other changes likely

Ben Scrivens received several encouraging taps on his pads prior to being the first goaltender off the ice and is likely to man the Kings’ crease for tonight’s game against the Phoenix Coyotes in Glendale, Arizona.

Scrivens is 1-0 with a 1.22 goals against average and .939 save percentage through three appearances with Los Angeles. He stopped 20 shots in a 3-0 shutout of the Florida Panthers on October 13 for his lone Kings win.

Phoenix is one of four Western Conference teams the 27-year-old has faced in the regular season. While a member of the Toronto Maple Leafs, he stopped 33-of-35 shots through 65 minutes before allowing shootout goals to Radim Vrbata and Patrick O’Sullivan in a 3-2 shootout loss to the Coyotes at Air Canada Centre on November 15, 2011.

Los Angeles is expected to use the same lineup that defeated the Edmonton Oilers 2-1 in a shootout Sunday night.

As for the Coyotes, Martin Hanzal is suspended, Lauri Korpikoski and Rostislav Klesla won’t go, and Jeff Halpern is questionable, per Sarah McLellan of the Arizona Republic. Radim Vrbata, who had been sick, is expected to play.

Klesla tried to skate yesterday but stayed off today. Tippett hopes he's able to get back on the ice in the next few days. 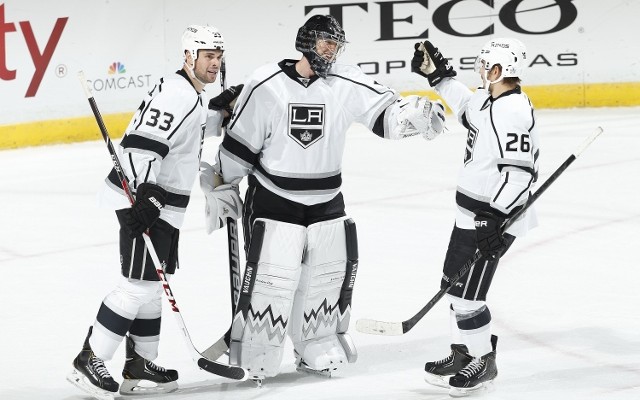