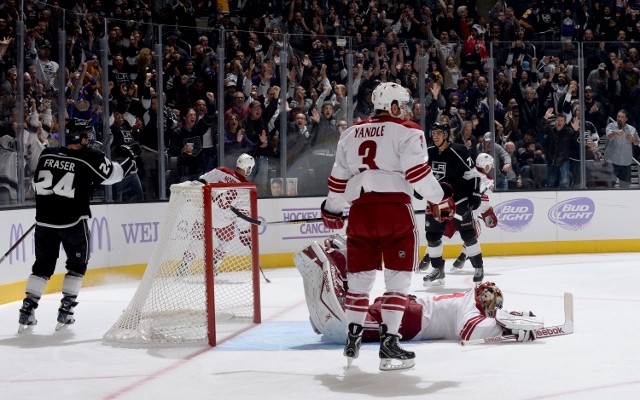 On whether he knew the team would score seven goals after the lineup adjustments:
Yep. Good thing they didn’t kick the field goal on the last play of the game.

On what he has seen in Dwight King this season:
He’s been pretty good the whole time. I said that in training camp about that position. He goes about his business every night. He doesn’t stand out, but as I said, it’s good to see him get rewarded for goals. Again, he’s our most solid left winger night in and night out.

On whether there will be the “monkey off the backs” of certain players in practice:
I’ll tell you something. The reason that we have 12 points is because Kopi scored a big shootout goal in Nashville. That got us a point. So, really, in the stats, I could go on about that with shootouts. When you win in shootouts, whoever gets the winner should get counted for a goal. I can’t understand why they can give you points in the standings, but the guy who gets the winner, you’re still on the schneid. [Reporter: But do you still see the guys skating [faster]…when this happens?] And the same thing with Mike Richards. Quite honest, the other night in the old days, Jeff Carter said ‘That’s Richie’d goal,’ and then the league goes and says ‘No, that’s not Richie’s goal.’ As I said, those guys both do a lot of stuff where it doesn’t matter about goals.

On what he does to celebrate his team scoring seven goals:
Celebrate? [Reporter: It’s not often you score seven goals in one game.] Maybe we will next game, too.

On whether it’s a “bigger deal” that Matt Frattin scored when compared to Anze Kopitar, under the premise that “Kopitar’s going to eventually come around,” but it was important for Frattin to “get going”:
Well, we’ve had several forwards that haven’t played much or that are in and out of the lineup, and he’s been one of them. You’re pulling for those guys to take the next step. I moved him back to right wing. I said that three days ago, I think, [that] we were way out of line as a team to think that we can get guys to change positions in the NHL during the year. Hopefully putting him back at right wing will help.

On what is said in the locker room with a 4-0 lead after 20 minutes:
There were some things we could go over that we wanted to. We’re playing a good team, a team that’s ahead of us in the standings. So you have to continue on. [Reporter: Just look at it as two points, and start the next one.] We’re playing ‘em again. You know what? We play Edmonton in between playing ‘em again, and we’ve got to be ready for Edmonton there.

On “getting scoring” going in a 7-4 win:
One game doesn’t mean you’re ‘getting scoring’ now. Quite honest, the games we’ve played at home, the two games that we’ve lost, we’ve scored one goal. So right now at home I think we’re 3-2, and we’ve scored two empty netters in those three games, so that means we’ve scored three, three – cause one [came in overtime], one is an empty netter, and tonight is [six]. So what have we scored? Three, three, and six. So when you score three goals, you should win. And when you allow more than two, you should lose. Tonight is a – what’s that word that you call that? – an anomaly…And it’s good for Jonathan Quick, too. He’s going to tell you he probably wasn’t as sharp as he wanted to be on a couple of ‘em as the game went on, but there’s a point also where your team’s got to win a game for your goalie, too.