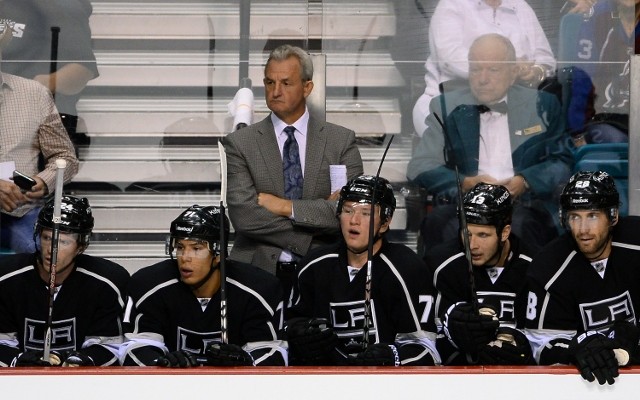 On whether he’s looking for something more from Frattin:
Not specifically from him. I think from our group…They drop the puck at 7:30, and generally that’s who’s in the lineup. So I don’t think the coaches on any team are going to tell you who’s in the lineup, or any of that. I can say ‘somebody’s hurt,’ just like Hanley Ramirez.

On the Dallas Stars’ most significant changes:
Probably the biggest adjustment would be the addition of the other guys from Boston, obviously, especially the centerman who’s going to be a star in the league. So it probably allows them to move Benn to left wing, which really helps their team, and obviously with the coaching staff change that will probably take a little different look at maybe what they want to do different. It wasn’t just the coaching staff. It’s the whole organization, with Jim Nill, who has a history of winning.

On if there are any tendencies with Lindy Ruff-coached teams:
He coached in the other conference, so it’s probably an adjustment coming to this conference. He’s had very successful years, and then they’ve had times where they’ve gone through ownership changes, and he’s had to adjust to personnel. That’s what we do as experienced coaches, is adjust to different types of personnel, so is there an ‘M.O.?’ No. I think you adjust to the type of players that you have, and that’s probably why he has coached a long time.

On his history with Ruff prior to the NHL:
I played one year of junior with him. Because he’s younger than me, I played one year with him. I think Dog, my brother, would have been with him a lot more. They coached together, too…I think Colorado beat them in the Cup [in 1996]. I think they were together there. I think. That was before Lindy went to Buffalo.

On any natural lull in the first game after a road trip, or whether that’s “an excuse”:
No, it’s not an excuse. It does happen. The biggest adjustment that you make coming to the west coast is the time change. You have to make the adjustment quick going that way, and then when you don’t have the extra day coming back, as this trip was, the big adjustment is time change, clearly. Quite honest, you see it too in yourself. The biggest adjustment is time change, getting your energy level set to the game clock. [Reporter: What are ways to counter that? Is it just rolling lines, getting some hits in early, forechecking?] Yeah, I think everybody’s different. It’s not one specific thing. It’s more getting your feet under you early. Is it hard to do? Yep. Did we handle it well last year? Really well. We were actually the best team in the league at handling it.