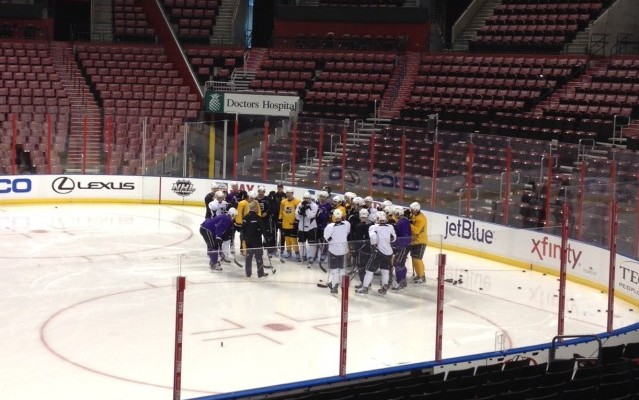 Darryl Sutter, on Alec Martinez’s performance against Carolina:
He was good offensively. Got some issues in his own end. They get no breaks, those guys. They either perform, or they don’t play. Very simple. There’s eight of ‘em. They should’ve competed in training camp to see…if they took somebody’s place. Now they have to fight during the regular season to do it.

Keaton Ellerby, on returning to Florida:
It’s cool. I spent three years here, so I had some good memories. I still have a lot a bunch of friends over there. It’s cool to be back, but I just go about business as usual, I guess.

Ellerby, on whether he’ll reconnect with any old teammates:
Yeah, I might meet up with a couple of them for dinner tonight. Just shoot the [breeze] for a little bit. Just see some old friends. It’s always good to see old friends, old teammates. Come tomorrow, though, they’re on the other team now, so it’s business as usual, I guess.

Justin Williams, on the warm reception he received from Hurricanes fans:
I’m obviously proud of every place I’ve played, and I want to leave a mark everywhere that I’ve been. I feel I’ve left better marks every team I’ve gone to. I hope this is my last team, but if it’s not, I hope to continue and play well, and show the teams that traded me away what they’re missing.

Williams, on the team’s time of possession against Carolina:
We played four games, and felt we hadn’t played very well at all, to be quite honest. We still have a ways to go, but we were able to sustain our good play through big stretches of the game and not have a big drop-off like we had in previous games. We’re happy in that aspect, but as I’ve said a few times before, scoring has got to improve.

Williams, on the quality of play Friday night:
I thought they played a really good game. I thought they pressured extremely well, and when it gets to a shootout, it can go either way. Our guys made the plays. But I thought it was a really competitive game.