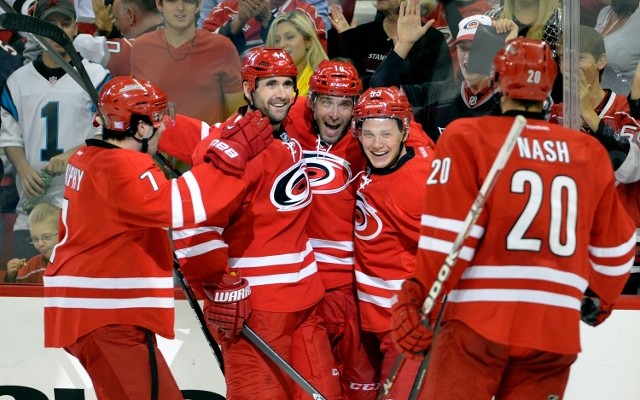 Level of confidence in projected lines: A. There were no changes from Wednesday’s lines at today’s morning skate.

Notes and milestones: The Kings are 31-26-10 all-time against the Carolina franchise, including a record of 12-15-7 on the road. Los Angeles is 5-3-2 in the last 10 meetings overall. The two teams will meet next at Staples Center on March 1, 2014. … Jeff Carter has four goals on 16 shots (25.0% Sh%) … Originally credited as a power play goal, Carter’s overtime game-winner against Ottawa has been changed to an even strength goal. The Kings power play percentage has been downgraded to 31.3% (5-for-16). … Carter has 25 points (13-12=25) in 24 career games against Carolina. … Anze Kopitar has six points (3-3=6) in five career games against Carolina. … Justin Williams recorded 201 points (81-120=201) in 265 career games with the Hurricanes. … Drew Doughty is one game-winning goal behind Steve Duchesne for the second most GWG amongst defensemen in franchise history. … Kopitar is one shorthanded goal behind Ziggy Palffy for the fifth most SHG in franchise history. … Williams has 499 career points (191-308=499) and is the current team leader in consecutive games played with 134.

-The Kings are in Raleigh for the first time in 20 months, and on one hand, there’s not a great deal of history between the two teams. The Hurricanes are the only opponent of the Kings that Jonathan Quick has never faced, as Jonathan Bernier drew the two previous starts against the ‘Canes, including a 2-1 Kings loss on February 4, 2012 in the team’s last visit. Erik Ersberg and Jason LaBarbera started in net for Los Angeles in the two games prior to Bernier’s two starts.

On the other hand, there are several players who have suited up for both teams. On Carolina’s end, there’s Kevin Westgarth, though the former Kings enforcer is yet to appear in a game this season for the Hurricanes. There’s also Tim Gleason, who was a key piece moving east in the trade that netted the Kings Jack Johnson in September, 2006. Gleason, now 30, suffered a concussion in the preseason and is on injured reserve. Carolina’s alternate captain played 125 games for Los Angeles in 2003-04 and 2005-06; his next game will be the 600th of his career.

There’s also Justin Williams, who scored an empty net goal for the Hurricanes in Game 7 of the 2006 Stanley Cup Final before hoisting the Cup for the first time in his career on the very same ice he’ll skate on tonight.

“It’s kind of like seeing an ex-girlfriend three years down the road, since we don’t come here very often,” Williams said of his North Carolina homecoming. “You come here, you’re happy to see ‘em, you want to show ‘em you’ve still got it. But, ultimately, you’re happy with the way things worked out for you, you know?”

“I’m definitely happy with the way things worked out for me.”

He also articulated what makes Raleigh and the Research Triangle unique amongst the 30 National Hockey League markets.

“I think that the southern atmosphere, the way people talk, how nice they are, the tailgating before hockey games – which has become pretty big here – kind of is unique to Raleigh,” Williams said.

Sitting on the home bench tonight will be Darryl Sutter’s 26-year-old son Brett, who was part of a November, 2010 trade from Calgary to Carolina when Darryl Sutter was Calgary’s general manager.

“Good team player, and blazed his own trail,” Sutter said of his son, who has never faced a team his father has coached.

“I wish we’d have had some time off so I could see him. That’s the only thing. It’s not a big deal coaching against him. We’ve been in locker rooms our whole lives. The only time I’ve coached him – actually, the only time I’ve been on the ice with him – was in novice hockey, actually, when he was a kid. But he’s grown up in a dressing room, and he knows what’s going on.”

Brett Sutter has been held without a point through the first four games of the season. Since moving on from WHL-Red Deer after the 2006-07 season, he has played primarily in the AHL, with 41 NHL games to his credit.

-Though there are still aspects of the game the team is looking to refine, most players and the coaching staff were encouraged by Wednesday’s 4-3 overtime win over Ottawa.

“I liked the start. I liked the way we moved our feet,” Williams said. “I didn’t like as the game progressed we let the foot off the pedal a little bit. In this league, a few years ago, two years, three goals was tough to come back [from]. Now it seems like it’s happening a little bit more. So, tonight, obviously try and get the lead, and keep pushing, pushing for the next goal, no matter what the score is.”

The team received a solid performance from Alec Martinez, who made his season debut and logged 18:09 of ice time, including 3:43 on the power play.

“He’s playing tonight, so we liked him,” Sutter said.

Including playoff games, the team is 18-6-1 in the last 25 games Martinez has played.

“Moved the puck, competed, didn’t back off in system play in terms of what we expect our defensemen to do. Didn’t turn the puck over,” Sutter said of Martinez’s performance. “Not any different than any other defenseman, what [they’re expected] to do. We want our defensemen to be fast, and we want them to be physical, and we want them to pass the puck well, and if you do that, you get to play. If you don’t, you don’t. It doesn’t matter what you do.

Daniel Carcillo made his Kings debut on Wednesday. Though he appeared to offer some good jam and a high compete level, he declined to assess his own performance. “I try not to do that,” he said.

Instead, Sutter offered an evaluation.

“He’s got to play in the offensive zone. If he can’t play in our zone properly and defend properly, then he won’t play,” Sutter said

-Slava Voynov logged only 16:42 of ice time, a total that surpassed only two nights of work from the 2012-13 season. Though the Kings received six power plays, he was on the ice for only 10 seconds of power play time.

“Tough training camp, tough start to the year,” Sutter said of Voynov. “Probably could’ve done more work this summer, and he’s going to have to do some more work to get his minutes back.”

Darryl Sutter, on what he’d like to establish on the first game of the road trip:
Play like we did on the last trip. Play good, solid hockey.

Sutter, on what he liked about the Ottawa game:
We liked everything about the game. We need to get better goaltending, a little better penalty killing, and we’ll be fine.

Sutter, on the efforts to get bodies in front of the net:
That’s not specific to the Kings. That’s specific to 30 teams in the National Hockey League.

Justin Williams, on the effort to get bodies in front of the net:
I’ve talked to Kopi with our five-on-five play, and we’re just going to get a little bit dirtier. Play ourselves like grinders, and hopefully our skill will pay off, and we’ll be able to get a greasy one, and then kick off from there. Just play hard, don’t get too fancy, and keep it simple is what we’re going to do.

Daniel Carcillo, on the win over Ottawa:
I thought we had a good start to the game. Obviously the first was one of our best periods. I thought it was a good effort by everyone, a bounce back game. Showed a lot of resiliency – them coming back, and then us being able to score on the power play, and obviously the PP was clicking.

Carcillo, on the effort to get bodies in front of the net:
To s ore goals, that’s where most of us do it. There’s only a certain few guys in the league that score from the outside. Those are the hard areas that you have to be willing to go to to get some goals.

Carcillo, on what the team will be looking to accomplish on the road trip:
Just playing a full 60 minutes is one of the keys, and playing a hard, simple game, which I think we all know how to do, and being physical on these guys and having a good start and taking the crowd out of it.

Notes: Lines via Kurt Dusterberg of NHL.com. … Tim Gleason (concussion) and Tuomo Ruutu (lower body) remain on injured reserve. Including Joni Pitkanen (heel), who is out for the season, the Hurricanes have already lost 12 man-games to injury. … Los Angeles and Carolina will meet multiple times in a season for the first time since 2002-03. Six of the last seven games between the teams have been decided by one goal. … The Hurricanes were 3-2 winners in Washington last night, with 18-year-old Elias Lindholm, the fifth overall pick in the 2013 NHL Draft, scoring his first career goal. Carolina will play 20 sets of back-to-back games this season. In nine sets of back-to-back games last season, they were 5-4-0 in the back half. 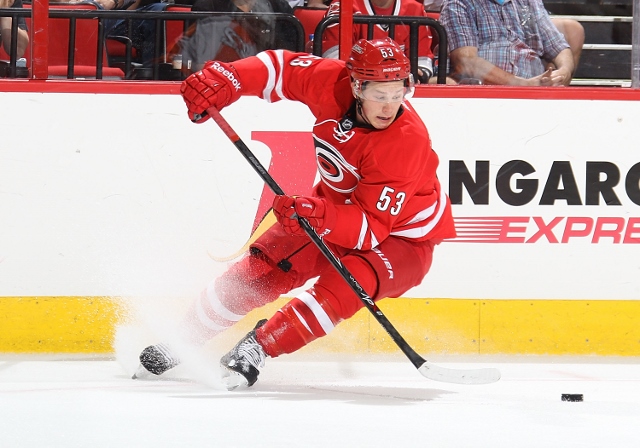