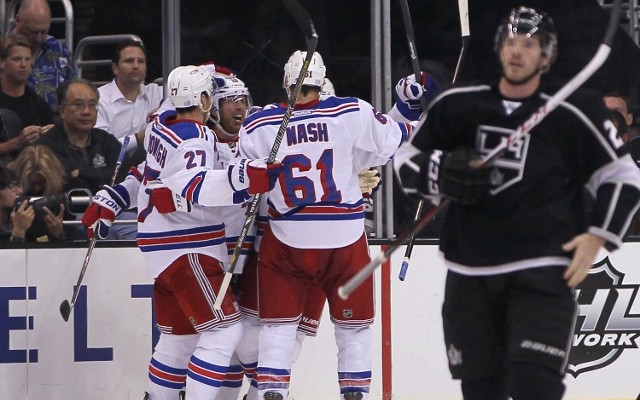 On what the team needs to do to increase five-on-five scoring:
It’s not a concern. You can’t give up three goals tonight. The first one, Doughty gives Nash the puck, The second one, Muzzin gives Nash the puck. And the goalie can’t drop his stick from 200 feet away. [Reporter: So you’re not concerned with the effort?] No. I think there’s some execution issues, obviously, when players have the puck on their stick and give it to the other team.

On the “mock cheer” Quick received when making a save shortly after he allowed the third goal:
It’s pretty normal. [Reporter: I mean, for what he’s done for this team, is that not a little cruel?] Nope. [Reporter: Did you have a chance to talk to him?] No, there’s nothing to talk about. He dropped his stick. What do you want me to talk about? Tell him not to drop his stick? [Reporter: I don’t know. Put him at ease or something.] Not a chance. It’s his job. Stop the puck. So obviously he thought he didn’t need a stick.

On Clifford skating with the “top line” in the third period:
Matt Frattin was gassed there a couple shifts. That’s all. Then [we] moved Matt to right wing. That’s all. He was probably our strongest forward.

On whether the turnovers are a “byproduct of early season hockey”:
You know what, don’t get so philosophical about everything. You just asked me the same friggin’ question, right? I said ‘Drew turned it.’ It’s not a ‘team turn.’ When you have the puck on your stick, and you give it to a top player on their team, that’s not a team turnover, that’s a top player turnover, and Muzzin, [is] going to have to learn not to turn the puck over if he wants to play, period. So that’s not a team problem.

On whether he called his brother to wish him a happy 57th birthday:
Which one? [Reporter: Brian.] No. October 7th, that’s right. October 7th. Well, there’s lots of ‘em.His birthday used to always be on the start of NHL season, always that weekend. Thank you. I’ll remember that.

On whether it would be “tough to sit Muzzin down”:
Not at all. No. He and Marty are pretty interchangeable.