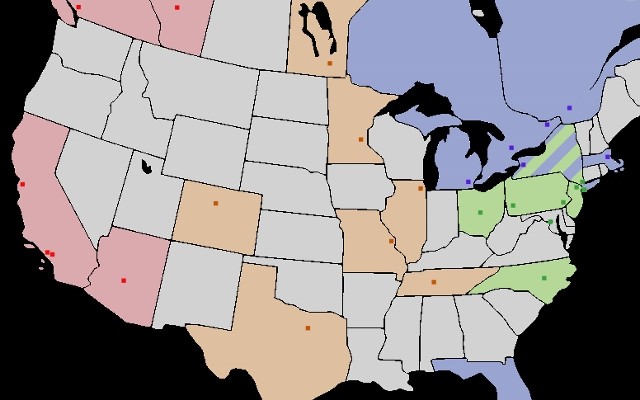 On whether he gets a “charge” out of home openers:
No. I’ve seen too many of ‘em. [Reporter: Is it tough for the guys?] Tough part? Hey, the only tough part is, quite honest, it’s always nice as players introduced as all that, but most of ‘em are just ready to go, and ‘let’s go.’ And then when we were in Minny, we had to set the clock at 24, 26, and it’s usually at 18. That doesn’t sound like much, but that’s a lot. Basically, we went out on the ice, and when we set the clock, it’s almost half an hour before they had to sweat out there. So from a player’s standpoint, that’s the only thing you don’t like about it. And then Winnipeg, hey, I’ve only coached in there once before because we didn’t play ‘em last year, and then two years ago we played Chicago the night before and then went in there, and that was the first time I had been in that rink for an NHL game, and it was awesome. That’s the best crowd that I’ve probably been in in two years, was in Winnipeg…It was awesome. It’s right on top of you, too. It’s sort of like San Jose, but the crowd is ‘loud good,’ meaning they understand what is going on. It’s ‘loud good.’…[Reporter: You’re right though. It did remind me of being in the Shark Tank a little bit.] It’s just the building’s set up like that. [Reporter: We had a much better view. The press box is much closer.] In Winnipeg, I think…the one thing they wanted to do different or better was get more…press seating. That was one of the things that they had to get ready for the NHL.

On whether starting back-to-back is a “good way” to start the season:
I guess I’m being nit-picky again, but we didn’t have to. Minnesota’s building was open the night before. I don’t understand why they set the division up at seven teams and, really if there’s any advantage out here, it should be in your division, meaning how your schedule is set up. It doesn’t really make much sense that we should have played back-to-back to start, because we didn’t have to. We didn’t start the season October 1st. So there’s two days before. Minnesota’s building was open. Minnesota friggin’ would’ve loved to play, too. And then Anaheim came in to Minny. The plane that took us to Minny, that plane and crew turned around and went to Denver, picked Anaheim up because they were playing in there, brought ‘em all the way back, and then they play in Minny last night, and then they go to Winnipeg. I know we’ve done it forever, but we’re not in [the Metropolitan] Division. That’s a huge advantage being in that division…There has to be a little bit of a give. I learned that in San Jose. There’s no give out here. It used to be where you’d get schedules and go back-and-forth in the league. Now it’s the one they kick out of the computer. It’s pretty much your schedule. Here you go.

On facing unfamiliar teams early in the schedule:
Yeah, it’s fun…[We] play [the Rangers] tomorrow, play Ottawa, Carolina, Tampa, Florida. That’s five teams in your first eight games we haven’t seen. Even with the players, cause they’re asking questions about guys they haven’t seen, or don’t know players, or guys looking at stuff. For example, in Winnipeg, our guys didn’t know the Scheifele boy at all. I haven’t seen much of Trouba. That’s the fun part, and I think the players really enjoy that, too. It’s different.

On Dustin Brown’s reference to the infrequency of playing in opposing buildings:
Well, we can say that about not playing in those buildings, but it’s the same thing for lots of those guys, too…I love that part of the schedule this year, where you’re playing everybody one-and-one. I think it’s awesome. If I was a fan, I would definitely want that. If I was a season ticket holder. That’s sort of an echoing statement, because that’s what everybody’s been saying. And after that, I have no idea. Usually you can come up with equations and formulas for what goes on, but with the imbalance of this out here, with our division, we play Edmonton four, everybody else five. Two-three, three-two, and then conference one-two or two-one. We’re beginning to figure it out.