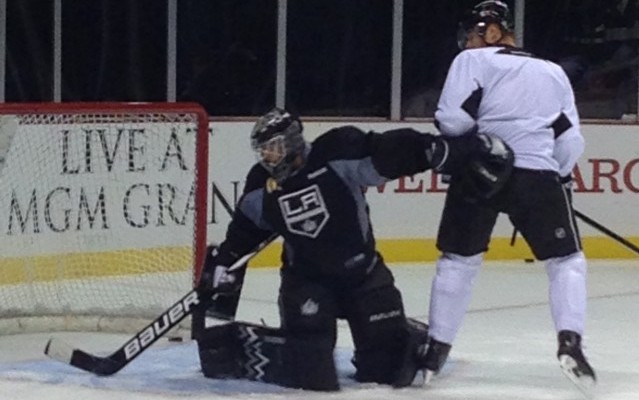 Though Darryl Sutter was in meetings following today’s morning skate and not available to confirm Dustin Brown’s assertion that he would play against the Colorado Avalanche, the Kings captain is prepared to play in the team’s preseason finale tonight at the MGM Grand Garden Arena in Las Vegas.

Brown resumed skating on Monday after suffering a hamstring injury on the first day of training camp and was with his family following the birth of his daughter earlier this week. He rejoined the team in Las Vegas on Friday.

He skated with Justin Williams and Tyler Toffoli during line rushes this morning, with Williams staying on for extra work with tonight’s scratches. The line projections later today will place Brown opposite Toffoli on a line centered by Anze Kopitar.

Brown, on how the hamstring felt after the morning skate:
It’s good. It felt pretty good for a week or so now, and getting into the on-ice stuff. Tonight, I think, will be good just to get hit and hit, just get the body ready for the next 82 games. The only thing I feel is probably the bruising is still there, but it’s just like any other bruise. It’s going to hurt until it’s gone. But the actual muscle feels good.

Brown, on the X’s and O’s not being as important as the reads and looks:
Yeah, it’s more the timing. One, just the timing and everything, and again the physical side of things – just getting rubbed out, and rubbing guys out, and getting your body ready to go. We play the same system pretty much, and it’s just a matter of getting there, my timing side.

Brown, on whether he’s excited to take the ice in a game for the first time since June:
It’s more probably a work mentality, quite honestly. Just getting what I need out of the game and getting ready because we’ve got to get ready to go on the back-to-back right at the start of the season, so I’ve just got to get ready for that. I’ve been in the league for a little while now, so the preseason is exactly that – just getting your body ready and getting your mind ready.