Good afternoon from the rarified air of Denver, Colorado. Tonight’s preseason game between the Los Angeles Kings and Colorado Avalanche is slated for a 7 p.m. local start, which means puck drops at roughly 6:05 p.m. Los Angeles time. Tonight’s referees are Frederick L‘Ecuyer and Chris Lee; the linesmen are Lonnie Cameron and Mike Cvik. Nick Nickson and Daryl Evans will provide the game call on KTLK 1150, with I Heart Radio providing the internet stream. The game will not be televised.

-The Kings brought seven defensemen on the trip, and Andrew Bodnarchuk took rushes with both Alec Martinez and Jeff Schultz this morning. Because the entire team left the ice nearly simultaneously, it was difficult to get a read on who will watch from upstairs with goaltender J.F. Berube. It will most likely be Bodnarchuk. Expect to see Andy Andreoff take some shifts at center, as well.

-Ben Scrivens will start in net and is likely to go “either half or 40. It just depends,” according to Darryl Sutter. Martin Jones will come on in relief.

-Willie Mitchell returns to the Kings lineup for the first time since June 11, 2012. He’ll skate primarily with former D-partner Slava Voynov. “It’s nice that Darryl’s kind of putting me with him at the start, just because I am familiar with his game. He’s familiar with mine,” Mitchell said. “It kind of makes the transition when you haven’t played hockey for a little while a little bit easier. Just looking forward to it, and just looking forward to just doing the same thing all of us have been trying to do – improve on our game every day and get better, and get better reads and better timing, and continue to do that tonight.”

-Nick Shore, a Denver native who played at Denver University with his brothers Drew and Quentin, will play in front of friends and family in his second professional game tonight. He has rarely played at the Pepsi Center – there was a DU exhibition game last year, and the odd opportunity when growing up in the area – though he did support the Avalanche and is used to “coming and watching here as much as I could,” he said. “Growing up in Denver, obviously it was nice to see when they won the Cup in ’96 and ’01, so it was definitely a cool time to be in Denver.”

Darryl Sutter was guarded when asked about Shore’s showing thus far. “We’ll give him another game,” he said, referring to tonight’s affair.

-After vocalizing his opinion on hybrid icing, Sutter weighed in on the shallower nets, and used hand gestures at times in doing so.

-Colorado will be icing a mostly veteran lineup with some top-end talent in Matt Duchene, Ryan O’Reilly, Paul Stastny and captain Gabriel Landeskog. 18-year-old forward Nathan MacKinnon, the first overall pick at the 2013 NHL Draft, will not play because of a hip flexor. Sami Aittokallio, who made his NHL debut last spring at Staples Center, will start in net for the Avs.

Darryl Sutter, on defensive plans through training camp:
We’re going to carry 10 to 12 guys right through.

Nick Shore, on what he has heard from his brother Drew, with the Florida Panthers:
Well, it’s obviously nice to have him going through the same situation. I’m able to draw off a lot of his experiences, so it’s a huge help for me.

Shore, on how his style of play differs from Drew’s:
I’d say we definitely have some similarities, but at the same time I think we approach the game a little bit differently in how we play. It’s always been great having him for me.

Shore, on what he looks to build off after his previous preseason game against Phoenix:
Well, I think that was just my first real experience playing in a pro game. We obviously had the two rookie games, so it was a little bit different. So, obviously, you can draw a little bit from that, but really, I think tonight’s going to be a little bit different. Different line and everything, so I’m just looking to give my best effort and hope for the best.

Shore, on whether Justin Williams and Dwight King have offered encouragement:
Certainly. I think from all these guys, you can take so much from them. Obviously they’ve been in the league for a long time. They’re great players. Just watching them, both on and off the ice, you’re able to learn a lot from how they conduct themselves and what they do.

Shore, on how he would describe the Denver – Colorado College rivalry:
You know, those are the games that for my three years in college that you definitely look forward to. Obviously that was our big rivalry. We had a couple, but those were pretty special to play in. [Reporter: Was it as big as the Minnesota rivalry? What were your favorite rivalries?] I’m not sure. Obviously CC was a huge one. Loved playing NoDak and Minnesota and those guys. It’s tough to say where I’d rank it, but it’s definitely up there. Those are really fun to play in, and i had the privilege of doing it for three years.

The new Pepsi Center scoreboard was too large to truly put into proper scale in the banner photograph. Lo, it is mighty: 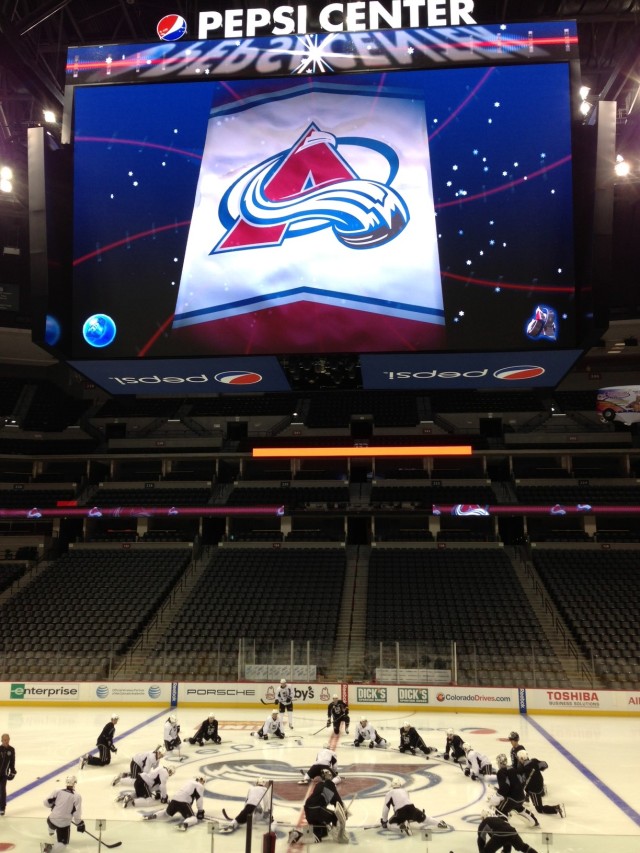