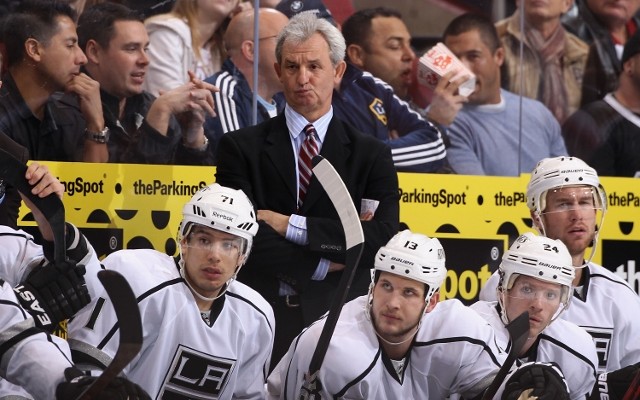 On what he’s looking for from Willie Mitchell in Friday’s game at Colorado:
Just try and get the minutes out of him, and system and detail. He’s pretty well structured in the X’s and O’s part of it, so basically, get into the contact against a different team.

On whether he generally treats a player returning from injury like any other player in a game situation once they’re ready to go:
I think we’re lucky that it’s preseason so you can really watch him. I’m looking at him like he’s just a guy that hasn’t played for a while, and at his age, I want to see him get back into the flow of it. It’s got nothing to do with injury. I mean, he’s basically been through this once before, so now we’re going to see what he can do at this age.

On whether there’s a chance that Pearson, Vey and Toffoli could skate together on Friday:
Yeah. They’ll skate five-on-five together. They’re power play guys in the American League, so we’re going to use ‘em on power play, and then we’re going to try and fool around with some other guys shorthanded and things like that.

On whether Valentin Zykov will draw into any more preseason games:
We’ll just take it here – you know what? He had another really good day today. At the same time, he’s a junior player. He’s not playing on the big team this year. Now there’s probably three or four kids that are here that you just want them to be sponges.

On whether he has an update on Dustin Brown’s hamstring:
Brownie’s making progress every day, so we’ll hopefully get him on the ice either Sunday or Monday.