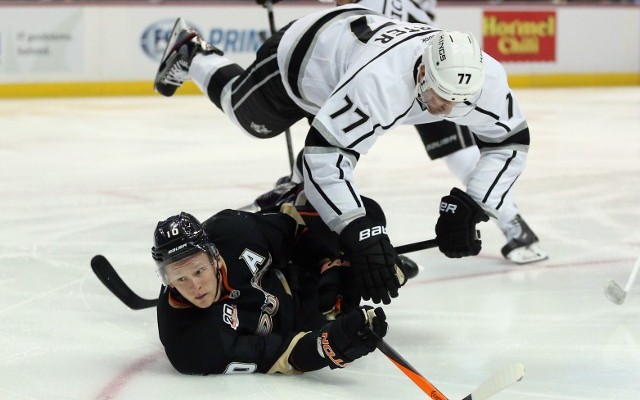 Carter, on the team-wise aspects that encouraged him:
We were just a lot cleaner. That’s going to happen as we start progressing here in the preseason. Really, everyone’s skating, shooting, passing, breakouts, power play was a heck of a lot better tonight. As we keep going here in training camp, preseason, that’s going to get better, and it should get better every game until the first game.

Carter, on his early impressions of playing with Matt Frattin:
He’s good. I mean, it’s not easy coming in. A lot of players that you don’t know, and for us, we don’t know much about him, either…Every game we have to get better, and in practices we’ve got to work hard just to get those little reads. Rick and I, we know where each other are going to go, and we try and just figure out what Fratty’s going to do.

Drew Doughty, on playing with Jake Muzzin:
I think me and Muzz play really well together. I think on exiting our own zone, neutral zone, offensive zone with the puck we’re unbelievable. I think we can definitely improve in areas without the puck, but that just comes with playing with each other and getting used to each other. I think we could be a really good pairing one day if we keep working at it. [Reporter: Is that something you might lobby for?] I’m definitely not against it, that’s for sure. I think that out of all the other D-men, I think I move the puck the best with him. It’s part of my game and something I love to do. So whoever I’m paired with, I’m going to make the best of it, but if it’s Muzz, I think we’ll be really good together.

Doughty, on Kyle Clifford’s penalty shot:
I actually called it. I knew he was going to go high glove. That’s his shot. So I wish he could have scored there, but I thought Cliffy actually played a really good game tonight. I don’t think it was fair that he got kicked out, but whatever.

Doughty, on whether the game was a step in the right direction:
Yeah. We weren’t happy with either of our games last…Sunday, and we needed to make grounds. The coaches kind of gave us that one first game to kind of get our feet going, to get used to playing, and tonight it was back to normal. There were no excuses. Darryl was on us. John was on us. Davis was on us. We made sure that we were prepared for this game to come in here and get a win, I thought we did it pretty demandingly.

Matt Frattin, on the amount of special teams practice he has been a part of:
Not that much. A little bit in the morning skates before games – just breakouts and in-zone…it’s like 5-on-0, so it’s nothing with pressure. But I mean in games we’re moving the puck pretty well, and we’re winning the battles off rebounds. That’s very key for a power play.

Frattin, on playing with Jeff Carter and Mike Richards:
They’re two great players. Carts has the fast speed down the wing, and he’s got that long reach and he has a great shot. Richie’s just a smart, hard-working guy, and he’ll get you the puck if you’re wheeling. [Reporter: Think you guys might have something there, the three of you?] I mean, it’s only two games. We had a tough first game, and then a pretty good second game. It’s too early. We’ve just got to keep working at it and keep practicing together and build that chemistry. [Reporter: Who’s doing the majority of the talking – Richards or Carter?] They both do. I ask them questions. They kind of tell me what they’re thinking, and it’s some pretty good communication between all three of us. [Reporter: As a young guy, you can’t ask for a much better opportunity than that, can you, when you get a chance to show that you can fit in with those guys?] Yeah. They’re guys who have played in the Olympics and for Team Canada plenty of times, so they’ve definitely proven themselves. They definitely bring me along, and they’re great linemates for me.

Darryl Sutter, on whether the game was a step in the right direction:
You know what? We just kind of watch individuals. I’m not really concerned about outcome. More about how guys play. [Reporter: Who caught your eye tonight?] I was happy to see Jonathan sharp, and I thought Garon made a couple big saves in the third, so it was good for him to get a solid period under his belt. Obviously Jeff and Drew were pretty good, but you know what? They’re supposed to be getting their game ramped up.

Sutter, on his early impressions of Matt Frattin:
If he wants to play with those guys, he’s got to be a real north-south, sort of an energy guy. I didn’t see him live the first game, so this was the first time, quite honest, live. Gave him power play time, gave him some penalty killing time, make him work.

Sutter, on what he has liked from Tanner Pearson:
Well, we need guys to play left wing. So it doesn’t matter if it’s Tanner or who it is. We’re trying to make Matt Frattin that, and it’s hard to switch positions. So Tanner’s a natural left winger, and we try and keep putting him in situations – it’s what I said at the start of camp. I want them all to play in the NHL, but you can’t. Sorry, we can’t this year. It’s whoever has the best training camps, right?

Sutter, on whether he reinforces not to read into early games, positively and negatively:
Yeah. You’ve got to base it on the whole camp, not on one period or one shift or one game. Just make sure that they’re all getting to play a lot…– all the guys that want a spot – until we get close to the end. I mean our schedule really breaks up, the preseason, when you look at it. So we don’t play now for three days, and then we have another three in there, and then we play three in like 11 days. You just kind of take it a game at a time. We have home games too, right, so it’s two-in-five. We’ll use lots of guys and have lots of guys around.

Sutter, on what John Stevens told him about Sunday’s home game against Phoenix:
It’s not really what John said. I mean, lots of young guys in lineups early in training camp are trying to make a difference. You want…our guys, as I said, [to] individually get better. You’ve got to play six or seven kids every game, and play those guys that we traded for in the summer, and see how they fit in. 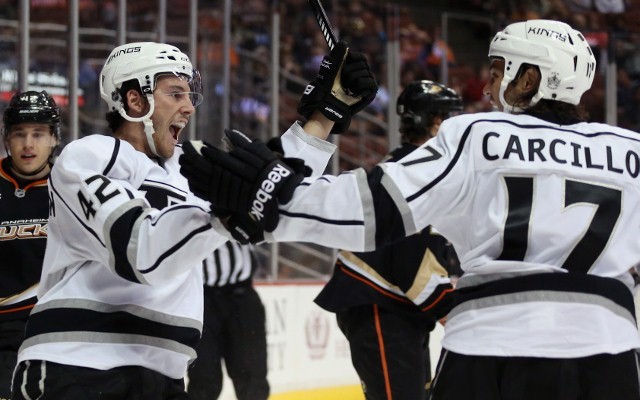