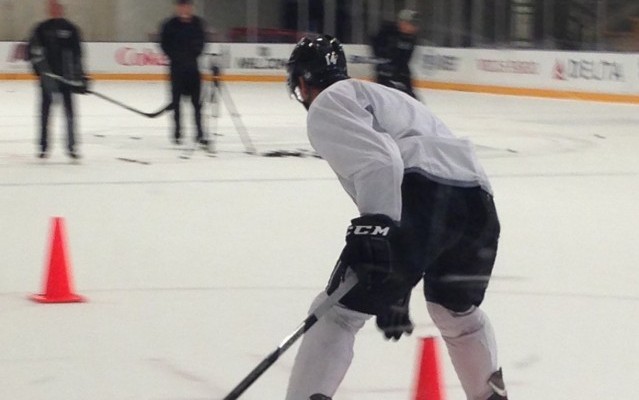 The Los Angeles Kings opened training camp Thursday morning at the Toyota Sports Center in El Segundo as 28 of the 57 skaters and goaltenders took the ice.

Though the pace of informal skates had been picking up in recent weeks, Thursday’s practices represent the first time that the team’s coaching staff are able to join the players.

Stoll, who experienced a health scare in early July when he suffered a seizure at his home, confirmed his readiness that he shared with LA Kings Insider on September 3 when speaking with reporters.

“I feel fine. No issues, no setbacks. A hundred percent. That’s the best way to describe it. I feel normal, and I feel fine,” he said.

The conclusion of the 2012-13 season left a bitter taste in the mouth of the players that will enter camp without the label of being the defending Stanley Cup champions.

“Every time you get bumped off the top, you want to get back as soon as you can,” Anze Kopitar said. “We certainly know it’s going to be a hard task, and there are good teams out there. But we also realize that if we are on top of our game, we’re going to have a good chance.

There was an injury concern raised as Dustin Brown left the ice prematurely after getting tangled up in front of the Kings net.

Dennis Bernstein of The Fourth Period threw water on any heightened concern.

There was a somewhat familiar face on the ice as Mathieu Garon skated in the morning session. Garon, a camp invite, enters a training camp without a contract for the first time in his career.

“I’ve got nothing to lose, I guess,” Garon said. “I’m just here trying to get better, trying to show what I have, and I mean, we’ll see what happens.”

Garon had other options, but familiarity drove him back towards the Kings on a tryout basis.

“I was waiting to see. I had a few other places, a few other choices,” he said. “But it seems like the team here, they really wanted me to come to camp. It was exciting for me. I know the city, I know this team. I’ve played here before, and I’m just excited to be here.”

He’ll compete with Ben Scrivens, acquired from Toronto as part of the Jonathan Bernier trade, for the back-up role. Scrivens is the favorite.

The Winter Olympics won’t take place until February, yet several players drew questions about the excitement of representing their country in Sochi, Russia.

Anze Kopitar, who probably shouldn’t have any problem cracking Slovenia’s lineup, referenced his family’s ties when asked about his country’s inaugural Olympic Hockey performance. Slovenia will compete in Group A with Russia, Slovakia and the United States.

“It’s going to be an exciting time for me, for my old man coaching the team, and hopefully my brother can make the team so we can experience that together and share the moment,” he said.

Jonathan Quick, who attended the United States’ orientation camp in late August, had his sights set on other horizons.

“That was a couple weeks ago,” he said. “Obviously, here we’re at day one of camp, so we’re doing everything right now to get ready for the season. We’ll go from there.”

Kopitar was asked if he plans on talking to Quick about how he plans to score on him in Sochi.

“We still have about four months just to remind him every day,” he responded.

That scoring touch wasn’t consistently there for Kopitar during the playoff run, though the star center shared a self-deprecating laugh when recalling his two-point performance in Game 5 against Chicago.

“I guess I scored in the last game so, I’ve been on a little bit of a hot streak for a long time now,” he said. “Hopefully we’ll keep it going.”

Mathieu Garon, on whether it’s strange returning to Los Angeles:
Yeah, a little bit. I mean, lots of the same faces, which is good. A couple guys IO played with in previous teams, so it’s good to be around here. I know this city a little bit, so it’s good.

Garon, on whether Darryl Sutter has spoken with him about training camp:
No, I mean he just talked to me like he probably talks to every other player. I mean, a couple good talks. I know my job here. I know what I have to do.

Garon, on competing with Ben Scrivens:
Yeah, I mean it’s something different for me. It’s the first time I’ve shown up to a training camp without a contract, and I know the situation well here. I’m aware of everything. So it’s just me being here trying to be good, trying to play good, and we’ll see what happens.

Jonathan Quick, on the excitement of the first day of training camp:
Obviously it is the first day of camp. It doesn’t quite feel like that, just because we’ve had a good number of guys out here for the past couple of weeks, and we’ve all been skating, working out together. We’re pretty much doing what we’ve been doing for the past couple weeks, but now we’re doing it with the coaches. That’s it.

Quick, on whether he was concerned that he was among the Vezina Trophy candidates:
Nope, we’re one of 30 teams that can win the cup. That’s what we are right now.

Quick, on entering training camp this season without worrying about rehabilitation:
No, same feel. Coming in, you’re one of 30 teams that can win a Cup. I had plenty of time to train and get ready for last season, as I did this year.

Jarret Stoll, on what he looks for in an 82-game regular season:
Finally we have an 82-game season. That’s going to be nice to start off. But just that consistency. You can’t afford to get in a slump, getting in a losing streak. You’ve got to keep pushing, keep your head above the water and throw together a good couple streaks if you want to make the playoffs. There are so many god teams now. It’s hard to just get in. That’s our only goal right now, is to get into the playoffs, and then we’ll go from there.

Stoll, on whether he’s excited to visit every NHL city:
Yeah, I think so. It’s good to play in different buildings, different atmospheres, against different players and teams. Like I said, it’s a good league. There are a lot of good teams out there. Even in the Eastern Conference, of course. It’ll be fun to get out there and play some different teams and hopefully get a different rivalry going.

Stoll, on any differences now that the Kings aren’t defending a Stanley Cup:
I don’t think it changes. It doesn’t change our attitude or our mindset. We know we have a good team. We know what we have to do to win games and get into the playoffs, and if we don’t do that, we won’t get into the playoffs. That’s just the way it goes. It’s hard. It’s not easy. We know that from experience in here. Hopefully that’ll put us over the top, and we’ll play the right way and have the right attitude.

Anze Kopitar, on the first official skate of the season:
It was good. It was good to be back. It was definitely different from last year. During the summer you know you have a goal. You have a time, date that you’ve got to be ready for. In my opinion it was a lot easier to get ready physicaly, mentally, and it was fun out there.

Kopitar, on whether there are differences with this training camp:
No. Not a whole lot. We still have to work on details. You’ve got to remember all the stuff that was put in place where we’re not changing a whole lot. It was just tweaks here and there. You’ve just got to get ready. That’s the bottom line.

Kopitar, on whether there’s more competition this year than last year:
I don’t know if last year’s camp you can really call it a camp, since it was a week or 10 days. I wasn’t a part of it. But I don’t know. Everybody just came back hungry and ready to go, and that’s the bottom line, really. You want to have 57 guys that are here working hard and just trying to get better.

Kopitar, on realignment:
Yeah, I don’t think it’s going to change a whole lot for us. There’s a still team that we’ve played in the past and we’re going to do it again. So we’re just going to play them a few more times, and probably a new rivalry’s going to come out of that one.