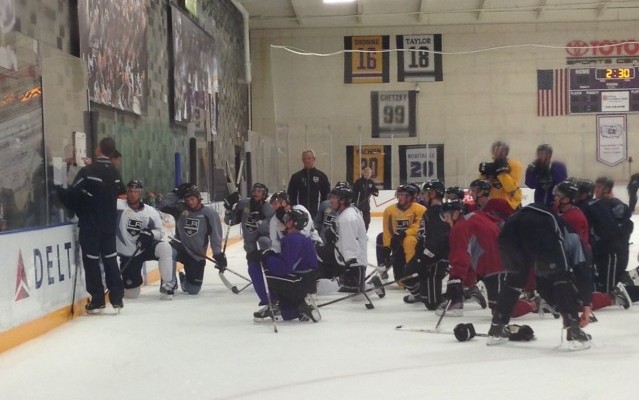 Darryl Sutter’s first training camp as head coach of the Los Angeles Kings continued Thursday afternoon as 29 players took the ice as part of Group B. It shouldn’t be an enormous surprise to learn that a heavy focus of the first day of camp was devoted to defensive zone coverage.

“Everything starts with defense,” Colin Fraser said. “I mean, we’ve been here a couple years with Darryl now. I think it’s repetitive and keep getting the message across that as far as your systems, and today was focused on the defensive part of the game, which is the most important.”

Fraser, who has appeared in 325 career NHL games, will have stiff competition in camp as a role-playing, checking center. Andy Andreoff, who totaled 26 points (13-13=26) and 111 penalty minutes with Manchester in his first full professional season a year ago, is capable of playing center and was among the impressive skaters at rookie camp.

“Look at the number of bodies around,” Fraser said. “We’ve got 14, 15 forwards, and then you’ve got the young kids coming up too. Back when I was a 21 or 22-year old, you’re always trying to steal someone’s job, and somebody coming up is always going to try and steal yours, so you’ve got to kind of keep that edge, especially for a fourth liner like myself. Keep that edge to stay in the league and to stay on the team. You’ve got to be at your best every day, or if you’re not, somebody else will be, and they’ll step ahead of you.”

For Matt Greene, the first day of camp under Sutter was a first step towards being prepared for the season opener on October 3 at Minnesota.

“I mean, it’s what we need. Getting the legs burning for defensemen, getting up and back, pivoting, playing one-on-ones, getting some contact finally with the puck and without the puck and just doing some game-like drills,” Greene said.

Fraser was eager to return to the ice after the abbreviated off-season.

“You’d rather a short summer than a long summer, right? It’s good to be back. You always kind of get that itch when September rolls around. You get that itch to get going again, and we’re excited to start. Obviously we had a good postseason, but not a great postseason, and back to work and hopefully we can make a run at ‘er again.”

TOFFOLI IN OR OUT?

Could training camp resemble a game of musical chairs, with Tyler Toffoli the last player standing?

Probably not. Smart money is on the Calder Trophy candidate making the team out of camp.

Still, there may have to be some maneuvering from previous lineups for the 2013 AHL Rookie of the Year to earn a spot in which he’s comfortable, as the team is deep down the right side and is looking for production on the left. Toffoli, a natural right wing, is vying for permanence on Darryl Sutter’s lineup card.

“You know, that line in Manchester was really good last year for us, the whole line,” Sutter said. “So if one of them jumps out, awesome. If Pearson, Vey or Toffoli jumped out, that’d be awesome. But we have our 11 or 12 guys that played here all of last year on a good team, so you know what? They have a foot up – and then Frattin coming in. It’s highly unlikely that all three of them, if you’re a hundred percent healthy, that three of them or two of them would be here. So one of those three is going to get a good crack.

Sutter was then asked if there was a chance Toffoli could open the year in Manchester.

Though he was already well acquainted with his teammates, Thursday marked the first time Matt Frattin took the ice for an official skate under the direction of Kings coaches.

Darryl Sutter noted that Frattin would be a primary option to fill a hole as the second line left wing, one of the few spots on the team that would appear to be wide open for competition.

“I mean, these guys have been together for a couple years now,” he said. “They haven’t really moved too many pieces. They’re kind of a big, core group. In the dressing room, I feel like everybody’s a good, confident, well-spoken guy, and they’re definitely easy to get along with. That’s exciting to be a part of.”

Frattin, who spent an additional six or seven minutes chatting with reporters after the recording devices were turned off, struck a positive note when discussing his move from Toronto to Los Angeles, and his early impressions of the Kings.

“Any professional wants to be a part of a winning team,” he said. “They’ve got everything that they need to win another Stanley Cup, and we’re going to definitely put our best foot forward for this year, and it starts today.”

One storyline to follow during training camp will be the emergence of a player alongside Matt Greene as part of the team’s third even strength defensive pairing – assuming Drew Doughty remains with Robyn Regehr and Slava Voynov slots in with Willie Mitchell as a reprise of their 2011-12 pairing.

Jake Muzzin, one of the leading candidates to fill that role, spoke of his developing chemistry with the veteran defenseman.

“Me and Greener – communication on the ice is loud and clear, and we have to continue building it,” he said.

He was asked if he had already been yelled at by Greene, an assistant captain and leading voice within the dressing room.

Greene wasn’t as concerned about holding an audition for his defensive partner as he was with just getting himself ready for the start of the season.

“That’s what training camp’s for, just getting yourself going, making sure that you’re ready, and wherever you’re at, it depends on how you play in camp and where the coaches put you,” he said.

Martin Jones, the most advanced goaltending prospect within the Kings system, skated with the team after his contract terms were finalized on Wednesday. Previously a restricted free agent, the 23-year-old was 27-25-4 with a 2.53 goals against average and .919 save percentage last season for Manchester.

The lack of a contract on the eve of training camp wasn’t exactly keeping him up at night.

“I was very confident that something was going to get done, for sure, obviously. Maybe it took a little longer, but that stuff I don’t concern myself with. I just focus on training, having a good summer, and getting ready to play,” he said.

He also didn’t appear to be concerned with the goaltending logjam that includes Jonathan Quick, whose 10-year contract kicks in in 2013-14, Ben Scrivens and camp invite Mathieu Garon.

“You know, at the end of the day I’ve got to worry about my own game, and I can only do what I can control, and that’s play well and work hard, and the rest is going to fall into place,” he said.

Colin Fraser, on competition at this year’s camp:
I don’t know the numbers, but we obviously have extra forwards. Nobody likes to sit out, but somebody’s going to have to sit out. It’s the reality. I think it’s good to have that competitive edge. It kind of keeps guys on their toes and maybe playing their best because they do want to stay in the lineup, because if you’re not, you’re going to be sitting.

Fraser, on the Toronto Blue Jays season:
Man. I totally jumped on the bandwagon hard, and then I jumped off of it about as fast as I jumped on it. You know, I think it takes time to gel as a team. Hopefully that’s the issue over there, because they jcertainly have the players. Now they just need to kind of figure out as a team how they’re going to do it.

Matt Frattin, on the Kings’ reputation amongst eastern teams:
I mean, you watch them in playoffs the past two years, and they’re a big, strong, fast team that’s very hard-working and doesn’t give up too many goals. So, definitely you’ve got to [have] defensive responsibility, and have just got to work on that and just bring speed and physicality to the team.

Martin Jones, on aspects of his 2012-13 AHL season that he’s looking to build upon:
I definitely want to build and move forward, and I want to be able to make that next step and play in the NHL. It’s nothing drastic – just a lot of little things, attention to detail and just the pace of play is magnified a lot. I do want to make that jump, and so I’ve just got to keep doing the little things.

Jake Muzzin, on whether he prepared any differently over the off-season:
With my history and my back, I’d just do a lot of injury prevention workouts and stuff like that, not so much the heavy lifting that you some guys do when they’re younger. I worked on getting my legs a little stronger. The bigger guys hit harder and stuff like that, so I want to stay on my feet a little more. Pretty much just the injury prevention stuff and getting my legs a little stronger, a little faster.

Muzzin, on his approach to camp given the heightened competition:
You’ve got to go and earn a spot. There’s nothing given to you at camp.

Muzzin, on aspects of his 2012-13 season that he’s looking to build upon:
Just continuing getting better. It was a good year for me, and that’s just the first step, and I want to continuie getting better in all aspects of the game. Get stronger and just get better.

Muzzin, on consistency:
You have to be consistent every day. Every time you’re on the ice and the wanting to get better and push yourself and not get complacent or anything like that. For me, coming to the rink every day, get better and improve.

Matt Greene, on the first day of training camp:
It’s great. It’s good. Good to have some structure. Good to do some drills, some purpose rather than just getting your legs going and getting a sweat. It’s good to get some timing going. It’s fun to be back out there.

Greene, on whether he stayed at the Dodger game for all 11 innings on Tuesday:
No. Training camp the next day, man. Had to be here bright and early.

Greene, on his battery mate from Tuesday’s first pitch ceremonies hitting the game-winning homerun that night:
Van Slyke there. Yeah, he hit a bomb. It was good for him. Started the next game in left field, too. It was good to see.