Putting the Kids to Bed: September 9

Photos courtesy of Jon Bradley. You can view his Rookie Game gallery here.

-Following Saturday’s game in which players such as Linden Vey, Tanner Pearson and Jordan Weal stood out for their offensive maneuvering, it was the two-way efforts of players such as Nick Shore, Scott Sabourin and Robbie Czarnik that stood out and lifted the Kings rookies to a 3-2 victory over their Anaheim counterparts. Los Angeles was perfect on the penalty kill for the second consecutive game courtesy of Shore’s multifaceted efforts, and during long stretches he was the most involved Kings skater through the entire 200 feet of ice. Czarnik was relentless in his puck pursuit and helped win battles that advanced the play into the Ducks’ end, while Sabourin dished out several hits, fought, and provided an excellent screen on Alex Roach’s power play blast from the left point that gave L.A. a 1-0 lead. The game was a more physical affair than Saturday’s game at the Honda Center and involved a healthy dose of post-whistle scrums and jawing.

-Colin Miller was an interesting player to watch earlier this summer during Development Camp, and I thought he was a standout puck mover for the second consecutive game. He turned on his jets for an end-to-end second period rush and continued to show off his advanced skating ability along with a heavy shot from the point and ability to shoot off the pass. This is a player who was a camp invite in 2011, was drafted in 2012, broke through with a point-a-game effort as the Soo Greyhounds’ captain in 2012-13 and was impressive at both Development Camp and Rookie Camp, which shows that he’s a coachable player who continues to improve. It will be interesting if his overall skill package – which was that of a skilled, puck-advancing defenseman in junior hockey – will translate to the professional level.

-Kings goaltenders combined to allow three goals over the two games, thanks in large part to the exemplary play by Patrik Bartosak, Mathias Niederberger and J.F. Berube. Los Angeles came out sluggish for the second straight game, and key saves by Bartosak early – much like Berube on Saturday – allowed the team to capitalize on an early power play opportunity when Roach scored on his point blast on what appeared to be a set play off the faceoff win.

-These rookie games are exhibitions designed to utilize instruction and coaching in a competitive environment, but it’s impressive that the Los Angeles came away with a pair of wins against a talented Anaheim prospect pool. Though the Kings didn’t dress several advanced skaters in Linden Vey, Tyler Toffoli and Tanner Pearson, they still came away with a win against a Ducks team that featured Emerson Etem and Devante Smith-Pelly – two players with a combined 94 games of NHL experience – in addition to first round draft picks Rickard Rakell, Stefan Noesen, Hampus Lindholm and Shea Theodore and second rounder John Gibson, who backed the United States to a gold medal at the 2013 World Junior Championships. That L.A. outscored Anaheim 9-3 in the two games is an encouraging indication that the players have been incubated well within the Kings systems and were able to successfully implement their teachings in game settings. This reflects well on the team’s player development department and Manchester Monarchs coaches Mark Morris and Freddy Meyer. 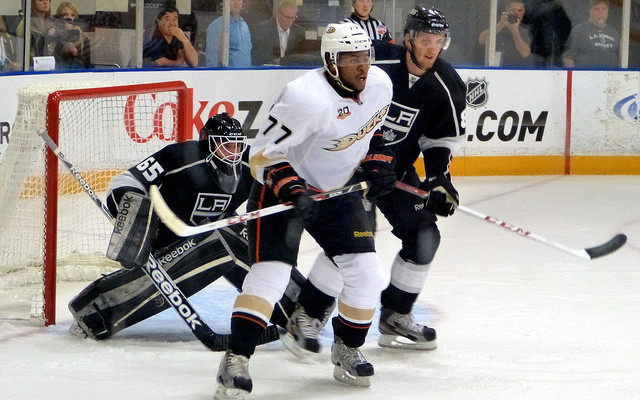