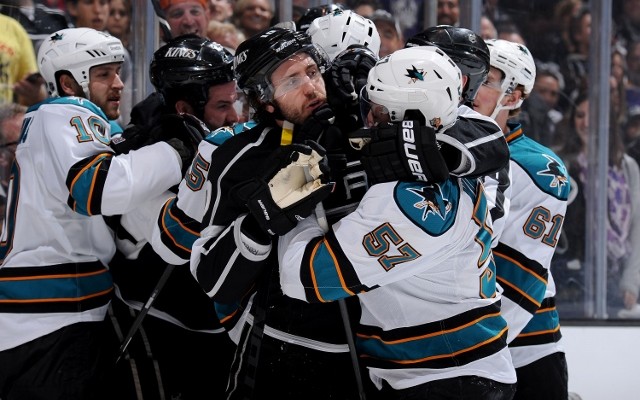 Any inkling over the last two years that the San Jose Sharks were facing an imminent decline was put to rest over the final two weeks in May as a stingy, committed, hard-working, well-coached, home-dominant club with excellent special teams and elite defense and goaltending took the Los Angeles Kings to seven games in the Western Conference Semifinals.

Yes, it was a battered and less-than-full-strength Los Angeles Kings team that eventually edged the Sharks. No, the Kings wouldn’t have won the series had Jonathan Quick’s save percentage dropped off moderately from .951.

Though the teams finished second and third place, they were the best teams in Pacific Division from mid-March onward and still represent the gravitation of power in the far west.

The Sharks couldn’t score last season. They posted 77 five-on-five goals, tied with Nashville and Detroit for the 25th-most in the league. Logan Couture (14), Joe Pavelski (11) and Patrick Marleau (10) were your double-digit even strength goal scorers. Always the playmaker, Joe Thornton scored five times at even strength.

The 24-year-old Couture has served as the primary bridge between the established stars on San Jose in Marleau, Thornton and Boyle and a younger generation that also includes Pavelski. Couture is the dynamic offensive force and provides consistent defensive intelligence and commitment. It’s awfully valuable that one of the conference’s purest goal scorers finished second in the league amongst forwards in blocked shots. As of this posting there is no “A” on Couture’s jersey – and with the experienced veteran core on this team, it’s not much of a surprise – but make no mistake, there is teal in his heart and soul, and it’s not long before there’s a letter on his jersey. It’s nitpicking a bit, but it would also improve the Sharks’ offensive fortunes if he developed into a high-30 goal scorer from a low-30 goal scorer. Should he remain healthy, that leap would represent the natural progression in the NHL tenure of one of the game’s elite young players.

Marleau will look to spread out his scoring more evenly this year, a task that should be less challenging over 82 games than it was over a 48-game sprint. After scoring nine times in his first five games, Marleau scored only once over his next 10, and then another seven times over the remainder of the regular season. The scoring in bunches continued in the playoffs as he scored in each game against Vancouver in the first round before tallying only once – in a Game 2 loss – against Los Angeles. As a 33-year-old veteran of 15 (!) NHL seasons, there’s the concern that the game may eventually take its toll on his body, though he remains an excellent skater and has retained a superb shooting percentage throughout his career – amazingly, his shooting percentage has never dipped below 10.3% in any NHL season – which makes any expectations of a Marleau drop-off a risky bet.

Joe Thornton is Joe Thornton and remains among the most difficult players to defend in the NHL. San Jose is often associated with being a team that is generally strong on puck possession, and his on-ice Corsi numbers mesh well with those of linemate Brent Burns. Burns’ move up front placed two of the team’s best possession and shot-generating players together, and there is certainly a possibility for increased even strength production from that line if they can find a left wing that complements the two better than TJ Galiardi could. Galiardi is now a Calgary Flame.

Tommy Wingels is one of the division’s better defensive forwards and strong in puck pursuit and battling, while Joe Pavelski has excellent speed and a good shot and can play any forward position and with any linemates. He’s also excellent on faceoffs, which furthers a strength that the Sharks have long been associated with: since 2008-09, San Jose has finished either first or second in the league in faceoff percentage. They won 55.8% of playoff faceoffs.

Good luck trying to earn a spot on this deep, veteran blue line if you’re a promising NHL prospect. Dan Boyle, Justin Braun, Jason Demers, Scott Hannan, Matt Irwin, Brad Stuart and Marc-Edouard Vlasic represent one of the deepest defenses in the league and one oozing with veteran character and leadership. 23-year-old East Bay native and graduate of the Junior Sharks program Matt Tennyson is a candidate to emerge as an option, perhaps in place of Jason Demers, who did not make a playoff impact and was used as a forward after returning from a sprained ankle.

When San Jose was struggling to score against Los Angeles in the playoffs, they found success by activating defensemen, a ploy that began in earnest in Game 2, a 4-3 Kings win. Brad Stuart and Marc-Edouard Vlasic scored in that game, and Dan Boyle also added a pair of goals during the series. Still, this is an outfit widely known as one that does an excellent job of keeping the puck out of its own net, and the team’s 2.33 goals against per game represents an excellent harmony between a veteran group and Vezina candidate Antti Niemi.

Niemi’s 2012-13 season was similar to Jonathan Quick’s 2011-12 regular season, though perhaps not as extreme. He kept a team that struggled to score during large stretches afloat within the playoff race and was the single most important player on the roster in what was a career campaign. He finished third in Vezina Trophy voting and should be expected to maintain the lofty numbers in 2013-14 he produced in 2012-13. He won’t have the benefit of a large margin for error, as the Sharks and their opponents combined to score four goals or less through (at most) 65 minutes in 22 games last season.

Niemi is also expected to compete – and very likely earn – an Olympic roster spot, though he’ll have to distinguish himself in Finland’s loaded crease amongst a group that includes Pekka Rinne, Tuukka Rask, Kari Lehtonen and Niklas Backstrom. Difficult decisions lay ahead for Finland’s coaching staff.

26-year-old former Minnesota-Duluth Bulldog Alex Stalock is expected to earn the backup role to Niemi after Thomas Greiss signed with Phoenix over the off-season.

Generally a team with standout special teams units, the Sharks will look to balance out their power play success between the newly-named SAP Center and road buildings after posting a 25.6% success rate at home and a 14.9% percentage on the road. It’s really part of a larger issue, as San Jose was an outstanding 17-2-5 at home and 8-14-2 on the road.

The Sharks have earned their share of divisional banners while navigating the busy waters of Western Conference authority. For the Kings’ Northern California rivals, it’s becoming clearer that yet another Pacific Division title would represent one of those “dirty banners” referenced by Darryl Sutter. This is a team that will continue to set its sights deep into the spring, and the distance past 82 games that San Jose is able to pilot will be the ultimate factor of the team’s success.

Todd McLellan’s veteran group is certainly equipped to be amongst the final eight teams left in hockey. One gets the sense that the degree to which the Sharks improve their offense and play away from the Shark Tank will determine whether they’re destined for another early playoff exit or, if they remain healthy, the organization’s first trip to the Stanley Cup Final.

LAKI chatted with CSNBayArea.com Sharks Insider Kevin Kurz to learn more about the 2013-14 San Jose Sharks, beginning with the team’s forwards and the updated status of oft-injured forward Martin Havlat.