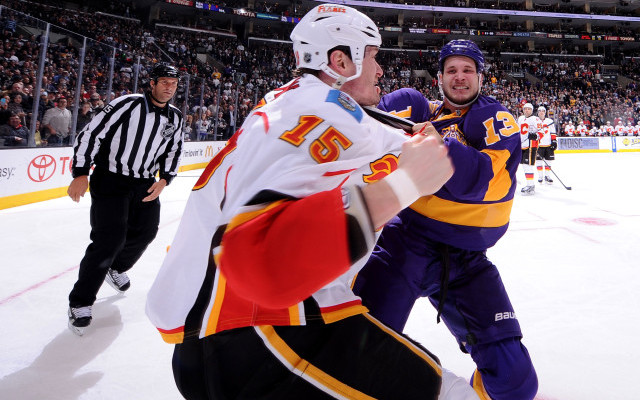 Since winning the Stanley Cup in 1989, the Calgary Flames have won three playoff series, all in 2004 under Darryl Sutter en route to a Game 7 loss to the Tampa Bay Lightning in the Stanley Cup Final.

Other than that magical run, the Flames are a combined 0-10 in playoff series since 1989 and endured a seven-year postseason hiatus from 1996-2003 and are currently in the midst of a four-season playoff drought.

Unless a bevy of questions are followed by resoundingly positive answers, the Flames’ playoff drought will extend by another season.

It really isn’t even right to think about the upcoming Calgary season that way. Early in a full-fledged rebuild, the addition of Los Angeles, San Jose, Anaheim and Phoenix to the Flames’ division doesn’t do much to help a team that will be looking to build an identity and strive for consistency while demanding a work ethic that surpasses that of its opponents every night. If Calgary doesn’t receive that work ethic consistently, there’s a good chance they’re going to lose a lot of hockey games.

Familiar to many Kings fans as Colorado’s head coach when the Kings and Avalanche battled head to head in a pair of seven-game series in 2001 and 2002, Bob Hartley returns for his second season behind the Flames bench and will look to distance himself from a disappointing conclusion to the 2012-13 season in which Calgary lost 14 of its final 22 games and fared poorly in possessing the puck and generating scoring opportunities.

His vision will be executed without mainstays in Jarome Iginla and Miikka Kiprusoff, and considering 31-year-old Mike Cammalleri will be paid seven million dollars in the final year of a contract that carries a six million dollar cap hit, there’s a strong chance he could get moved to deepen the club’s pool of prospects.

Speaking of that asset pool, there are several intriguing names that will be competing for heavy minutes up front. Swiss forward Sven Baertschi, who turns 21 the opening weekend of the regular season, ended his personal campaign on a seven-game scoring streak that netted nine points and certainly has the skill – as well as some underrated two-way smarts – to emerge as a breakthrough candidate. It would serve the Flames well to see Baertschi take off, as there are a collection of forwards more suited for a second-tier role that will continue to be used heavily. Lee Stempniak, Curtis Glencross and Jiri Hudler have all been productive NHL forwards who will see plenty of minutes against the opposition’s top players. The sixth overall pick in the 2013 NHL Draft, Sean Monahan played two seasons with Tyler Toffoli for the Ottawa 67’s and will likely be given a long look through training camp and perhaps the first nine games of the regular season. He doesn’t turn 19 until October 12. TJ Galiardi, who totaled two points in 11 playoff games despite heavy usage alongside Joe Thornton and Brent Burns in San Jose last spring, returns to his hometown and the city where he played junior hockey to compete for a top-six role.

Though Calgary struggled defensively a year ago, there are some useful puck-moving skaters that have the capacity to generate offense and sustain a power play that ranked ninth in the league last season and converted one out of every five opportunities. Dennis Wideman is mobile and averaged just over 25 minutes of ice time last season – including a power play time on ice average of 3:29 per game – to lead all returning players. Mark Giordano doesn’t receive the most attention but remains a versatile defenseman who blocks shots and is difficult to play against; he totaled 43 points as recently as 2010-11. 23-year-old TJ Brodie is certainly a candidate for a breakout performance in the team’s second defensive pairing after performing well with over 20 minutes of ice time per game a season ago.

There are major questions in net. Karri Ramo, who was 20 years old when he began a three-year stint with the Tampa Bay Lightning in 2006, returns to the NHL after four seasons as a dominant goaltender with Siberia-based club Avangard Omsk, guiding the KHL team to Game 7 of the 2012 Gagarin Cup in a losing effort to Dynamo Moscow. He’s likely slated into a rotation with veteran Joey MacDonald, while 6-foot-4, 26-year-old Swiss netminder Reto Berra, who has never played club hockey in North America, will battle for a roster spot. Kiprusoff remains property of the Flames but indications are that he will not fulfill the final year of his contract, and reports suggest that a Kipper sighting at training camp is highly unlikely. Calgary clearly possesses the weakest goaltending rotation in a division that features Jonathan Quick, Antti Niemi, Roberto Luongo, Mike Smith, and the rapidly improving Devan Dubnyk.

For Hartley and his staff, the primary goal will be to successfully foster a team identity based around a tireless work ethic that cedes no ground to its more talented opponents on a nightly basis. Though that may be established, this still shapes up to be a long, challenging year for the C of Red.