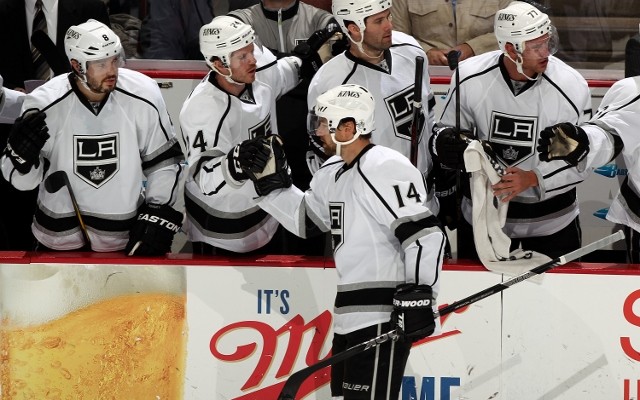 The Good: Justin Williams, aka Stick, has been incredibly consistent during his last three years as a King. Following seasons in which he recorded 57 and 59 points, he posted 33 points in 48 games, which translates to 56.4 points over 82 games. What’s that, you say? “Justin Williams is injury-prone and 82 games is a long reach”? Nonsense. Williams hasn’t missed a regular season or playoff game over the last two seasons and played through a slight shoulder separation in the 2013 playoffs.

On what Justin Williams brings to his line:
It’s the same thing with Willie all the time. Kopi probably gets all the attention – and rightfully so – with his skill set, but Stick does a lot of the dirty work. His vision on the ice, he can kind of do the corner work. For not a huge guy, he’s pretty good in the corner and he finds that quick play that springs a guy or gives a guy a great scoring opportunity. A lot of times that’s me coming as the high guy because Kopi likes to get in the corners as well. I think we just complement each other really well, and Stick probably goes unnoticed.

On what Williams has provided that may not show up in the box score:
I think when you look at people, I mean you look at Kopi’s stats – a big reason why he’s getting the numbers he’s getting is Stick. Even though [Williams] has not maybe been getting the assists or the points or the goals that he wants, he’s creating havoc in front of the net. Early on when we were struggling as a line, it was pretty evident we weren’t working hard enough, and now, the Anaheim game was a good example. He had a big impact on a lot of those goals and didn’t have a point. That’s when you can tell our line’s going really well. Regardless of his point total, he’s contributing in big ways.

The allusions to Williams being underrated correlate with the right wing’s possession stats. Often example A#1 when Corsi ratings and other metrics that gauge a player’s effectiveness in holding possession and generating shots and scoring opportunities are utilized, Williams is among the most useful even strength players in the entire NHL. In fact, his on-ice Corsi rating was higher than any other player in the league that played more than eight games. He accomplished this despite often matching up against other teams’ top scoring lines. For more on these possession values, Jewels from the Crown’s Williams evaluation has you covered.

There’s also his Game 7 history, which you might know something about. “How many” isn’t always as important as “when” when placing values on statistics, and Williams once again backed up his regular season scoring with a clutch playoff performance that included his two goals in a 2-1 Game 7 win over San Jose on May 28. He has posted five goals and nine points while winning all four Game 7s he has played in.

The maturity and leadership exuded by Williams – one of Los Angeles’ most vocal and emotional players – is an intangible that has helped develop the team’s culture and identity.

Also, how great was this shift against Chicago?

The bad: Williams’ shooting percentage dropped for the second consecutive year, an interesting trend considering his shots-per-game average was the highest it had been since his Carolina Hurricanes heyday. Williams’ career shooting percentage is 9.4% – a rate sustained by the 64 goals he scored over two seasons in Carolina from 2005-07 – though he dropped to 7.7% in 2012-13. Though he does have some history as a goal scorer, Williams’ game has gravitated more towards distribution and strong boards work as he has settled in well on a line with Dustin Brown and Anze Kopitar. He scored only once in his 103 minutes of power play time throughout the season.

Going forward: Williams turns 32 on the second day of the season, and it’s pretty easy to expect him to maintain his scoring output from 2011-12 and 2012-13 as as long as he remains healthy. There’s even the chance for him to raise his goal scoring rate, provided he accounts for more power play production and his shooting percentage rises back towards previous levels. There’s nothing much to hide – he’ll likely start out alongside Kopitar and Brown again, and unless injury or a prolonged dry spell affects the line, it’s a fairly safe bet that the trio will rely on their excellent chemistry once again and account for a heavy share of the team’s offense. There’s still plenty of value in Williams’ contract, which carries a cap hit of 3.65 million dollars and extends through the 2014-15 season.