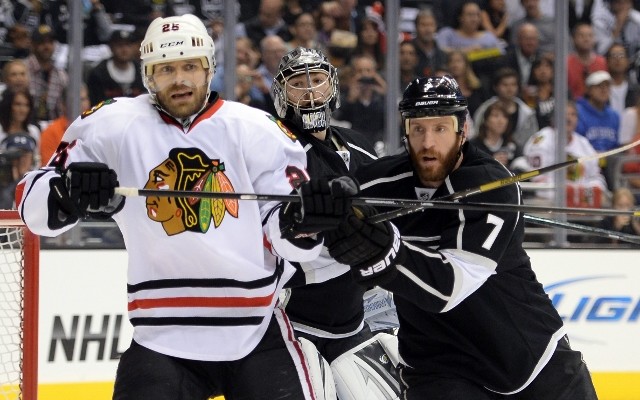 The good: With the Pittsburgh Penguins lacking enough cap space to re-sign him in the summer of 2009, the allure of playing for an intriguing young team (and drawing a significant pay raise) was strong enough to draw defending Stanley Cup champion Rob Scuderi to the opposite side of the country, away from Syosset, Boston, Scranton-Wilkes Barre and Pittsburgh. The quietly dependable defenseman nicknamed “The Piece” signed a four-year, 13.6-million contract and departed the Eastern Time Zone for the first time in his career.

“Of the teams that were still offering I thought they had the most potential,” Scuderi said. “I really liked their thought process and the direction the team was going and I wanted to be a part of it.”

If only the longtime fan knew the Kings the way Scuderi knew the Kings: over four seasons he won a Stanley Cup, reached the Western Conference Final and appeared in 50 playoff games – one more than he had in Pittsburgh. He appeared in 264 consecutive regular season games over the final three and a half seasons of his Kings tenure and finished first or second on the team in blocked shots each year in L.A.

In 2012-13 Scuderi was once again a dependable defenseman who experienced a significant rebound after some early season struggles; paired primarily with Drew Doughty, he was a minus-7 nine games into the season. Any questionable characterization of his early play is likely representative of the team’s sluggish start as a whole, and he was more effective once paired with Slava Voynov.

He averaged 21 minutes and 47 seconds of ice time per game – the highest average of his career – and led the team in shorthanded time on ice. His production also rose – his 12 points (1-11=12) over 48 games translate to a 20.5-point season for Scuderi, spread out over 82 games.

Offensive production? Scuderi? Well, he did score the team’s first goal of the season.

Then again, it’s not unusual for Scuderi to score his first goal on Jan. 19.

He also provided maybe the most accurate description of his play ever recorded when he admitted to playing “the same ugly but effective game” he had played since he was 18 years old. That same February chat offered Scuderi’s account of his lead-by-example contributions:

“I don’t have a lot of offensive talent, but putting yourself in the right position, just knowing where to be, knowing where to put your stick, trying to drive a guy in a certain direction – a lot of those things kind of happen naturally that you develop over the course of your life, and you hope that maybe it’s hard to explain, but hopefully a guy just sees it and sees how you do things.”

Win or lose, the intelligent veteran was always approachable post-game for insightful analysis, and it’s not difficult to think of Scuderi as a future coach. He finished in 17th place in Lady Byng voting, receiving a first place vote.

The bad: The Kings’ top target in unrestricted free agency, Scuderi turned down the Kings’ offer to return to Pittsburgh. So, there’s that. A defensive defenseman, his possession numbers were off from the previous regular season, even though the quality of competition he faced decreased slightly and he started shifts a touch more frequently in the offensive zone than he previously had – though advanced statistics don’t account for Scuderi’s entire impact.

He’s prone to being on the receiving end of a lot of collisions – a byproduct of his average hockey size and excellent positioning – and as someone who will turn 35 midway through the season, there’s the concern that the blocked shots and the challenging minutes he has been assigned could begin to catch up with him.

The biggest boost the Kings get out of having Regehr is lightening the load of abuse the Universe usually throws at Scuderi. — All The Kings Men (@KingsMenPodcast) May 9, 2013

Going forward: There is a significant chunk of minutes missing from the Kings’ defensive rotation with Scuderi’s departure, and perhaps the biggest question mark heading into the season centers around how many of those minutes Willie Mitchell (and Matt Greene, and other members of the team’s defense) will be able to absorb. Though Mitchell has consistently been a 20-minute-a-game defenseman since establishing himself in the league, it is still unclear whether the 36-year-old will be able to assume a similar workload after having sat out a season due to a knee injury. Fortunately, Mitchell in 2011-12 may have been an even more effective penalty killer than Scuderi in 2012-13, and both are left-handed shots who have experience playing alongside Slava Voynov. It’s a challenge whenever a sound presence and defensive stalwart is no longer a part of a team’s dressing room; fortunately the Kings have youthful (Muzzin, Martinez, Ellerby) and tested (Schultz) options in heavy competition for a roster spot and ice time on what has been established as one of the league’s deepest blue lines.