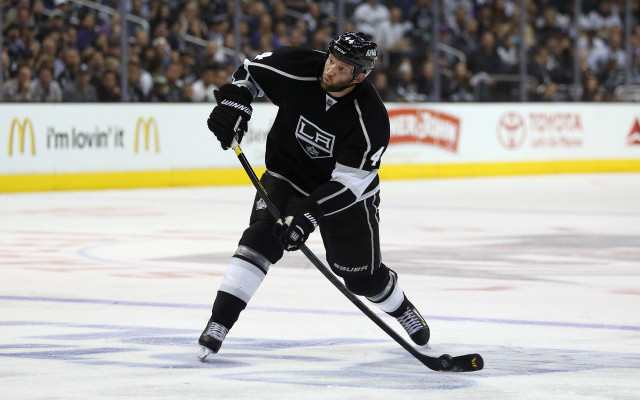 The good: Robyn Regehr came as advertised. Armed with a frame as sturdy as his character, the 6-foot-3, 225-pound stay-at-home blueliner was strong along the boards, in the corners, and as a defensive anchor that afforded partner Drew Doughty slightly more freedom to pinch and choose spots to jump into the play offensively. He ate up difficult minutes, jumping from 18:39 while with Buffalo to 21:16 with Los Angeles. Known as an effective penalty killer, Regehr helped lift a Los Angeles unit that operated at 81.7% before his arrival to a 90.0% success rate over his 12 regular season games in silver and black. In the playoffs, L.A.’s penalty kill operated at an 87.7% rate. He blocked 19 shots with the Kings, numbers that would have placed him atop the team in that category had he played all 48 games with Los Angeles. He’s a respected, experienced presence in the room that filled some of the aged veteran void vacated last season by Willie Mitchell.

Did I mention he can hit? This is vintage Regehr:

Regehr was excellent throughout the seven-game series victory over San Jose.

The bad: Regehr, once again, came as advertised. Possession metrics and advanced stats indicated (with a stick tap to Jewels From The Crown for the link) that while Regehr saw the toughest assignments out of anyone on the blue line, the Kings – a superb possession team – were less effective in zone entries, holding onto the puck, and creating scoring opportunities while he was on the ice. In the playoffs, only four Kings goals were scored with Regehr on the ice, while a team-worst 17 goals were scored against. This is bizarre considering Doughty, with whom he spent more time than any other defensive partner, was on the ice for 14 Los Angeles playoff goals. Though he dealt with a “bad arm,” Regehr was a minus-5 against Chicago after forging a strong performance in the San Jose series. He’s not fast, and at 33, his prime window in the NHL – as a masher with the Flames 10 years ago and when he posted 26 points (6-20=26) in 2005-06 – is in the rearview mirror.

Darryl Sutter, on Regehr and Doughty cultivating their chemistry late in the regular season:

“Big time. You know what? It just doesn’t happen. Even though they play together five on five, even tonight, Drew gets some power play time, Robyn doesn’t. Robyn’s a penalty killer, Drew’s on the back end of it, so the only time you see them together is five-on-five, four on four. There’s lots to learn and do there. The key is always how young guys respect the veteran, the veteran is trying to help the young guy get better.”

Regehr, on that hit on Ryan Reaves:

“Well, there was just a play where he was bringing the puck up the ice,” Regehr said. “We got to the neutral zone. I had a tight gap on him. I was trying to force him to make a play, and he just put the puck behind me and was going to chip it to himself. He ended up going around, and we raced for the puck. I let him have it at that first part, and then he tried to cut behind the net. That’s when I cut him off with an angle. That’s just kind of basically how it happened, and I forget who our player was after it, but they were right there to grab the puck, and away we went. It was a good job of positioning – I believe it was our forward. You get the puck back, and you don’t play in your zone a whole lot, and away you go.”

Going forward: Regehr was signed to a two-year extension at the end of May and should be at full health when he returns for training camp after undergoing surgery to his elbow in early June. He’s almost certain to start the season as Doughty’s partner – though Doughty often aligns with Jake Muzzin when the Kings are trailing in a game – and will see similar minutes to the ones he saw with Los Angeles late in the season. Though Willie Mitchell appears to be on track for a return, Rob Scuderi is no longer a member of the organization, which means that there shouldn’t be any major fluctuation in the amount of penalty killing minutes Regehr is assigned. There’s not a no-movement clause included in Regehr’s contract, which shouldn’t matter – unless Jake Muzzin or Alec Martinez or any of the other six defensemen the Kings have under contract takes a substantial step forward, Regehr is firmly entrenched in L.A.’s top-four. He’s a veteran, a big body, and a character-instilled leader who formerly wore an “A” and has played in 59 career playoff games, including 51 under Darryl Sutter. There are drawbacks in his possession metrics and his advancing age, though the tangible (blocked shots, penalty killing numbers, time on ice) and intangible (leadership, veteran presence, experience) characteristics Regehr brings outweigh them.