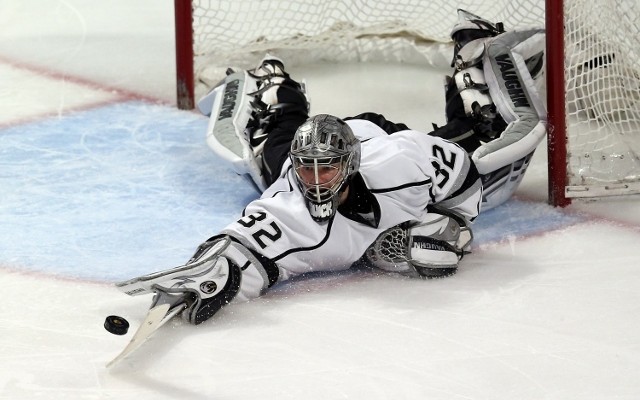 The good: Do you see those statistics above? Pay little attention to them, because when the games mattered the most, Jonathan Quick was once again on a completely different plane than his opponents. As good as Slava Voynov and Justin Williams were during the playoffs, no player had as significant of an impact on the Kings’ postseason fortunes as Quick, who followed up a .944 save percentage from the St. Louis series with a two-shutout performance against San Jose in which he stopped 195 of 205 shots for a .951 Sv%. This next fact is more appropriate in “The bad” section, but to continue the narrative, he posted a .897 Sv% and allowed 14 goals over five games in the Chicago series, losing four of them. So, basically, Jonathan Quick was closely tied to the team’s efforts.

He’s also among the more humble and acutely focused athletes in professional sports.

Quick, on whether a 2-0 series setback to St. Louis was a “new test” for the team:

Quick, on whether a 59-for-63 save performance against Phoenix and Dallas got him into a rhythm:

So we got two out of four points. So you’re .500. Got to be better than that. We’re a better team than a .500 team. We have an opportunity tomorrow to be a 600-change team. We’ve got to take advantage of that, and we’ll go from there.

He made critical stops in key moments of playoff games…

…and elicited this Logan Couture tweet, which was the only good thing to come out of the first period of Game 5 of the Western Conference Final.

Despite his uneven play in the Chicago series, he finished his postseason run with a 1.86 GAA, a .934 Sv% and three shutouts. Those are Stats That Help Teams Win Playoff Games. Speaking of playoff games, Quick has played in 38 of them over the last two springs.

The bad: Quick was wildly inconsistent through March. Was it because of his off-season back surgery, combined with a shortened training camp? According to Quick and Darryl Sutter, the answer was a firm “No.”

Quick, on whether he ever felt more comfortable in his return following surgery:

If I felt I wasn’t a hundred percent in January, I would’ve told the coach and I wouldn’t have been playing. I felt a hundred percent going into the season. The back surgery I don’t think had anything to do with my lack of performance early on.

Sutter, on whether Quick’s surgery affects his usage on back-to-back nights:

[His] injury is a non-issue. That’s a long time ago. That’s a non-issue. That’s like a player that got hurt last year affecting him this year. That’s not a factor in the decision with Quicker at all. I think the factor that we have now is performance. It’s simple. I think that we’re giving up three goals a game, and…you’ll win one in three, which is kind of what we’re doing. So you give up three goals a game, you’re going to win one in three. So we need better goaltending – it doesn’t matter who our goalie is, to tell you the truth.

36 games into the season, Los Angeles’ save percentage ranked 23rd in the league at a Mendoza Line-clearing .899. We all remember the #LAKingsGoalieTweetOff as Jonathan Bernier steadily cut into Quick’s minutes with consistent performances that eventually allowed Quick enough time to find his own game despite the compacted schedule and reduced practice time. Despite the small sample size, Quick was unable to find his rhythm on the second night of back-to-back starts. He stopped 24-of-29 shots in a 5-2 loss at Phoenix on March 12 and was pulled midway through the second period after allowing four goals on 17 shots during a Game 2 loss at Chicago in the Western Conference Final. He is not the most sound goaltender in handling the puck behind his own net.

Going forward: Amongst Quick’s NHL contemporaries, who else has established himself as a world class goaltender in the midst of his prime? Henrik Lundqvist? Pekka Rinne? The 2013-14 season will be an interesting one for Quick, who will have to contend with added work and travel as the frontrunner for the United States’ starting gig at the 2014 Winter Olympics in addition to having the first year of his 10-year, 58-million dollar contract kick in. The latter issue is of little concern given Quick’s grounded approach, though the former has the slight potential to cause a disruption in the goaltender’s rhythm while prolonging the direction of his concentrated focus. Jonathan Bernier has departed for Toronto; will Ben Scrivens’ play be able to keep Quick on the bench when he is in need of and is deserving of some rest? These questions are really minor issues that would be quickly discarded by Quick. In net, the Kings have a Conn Smythe-winning goaltender capable of stealing games on his own and who is likely amongst a small cadre of netminders capable of winning the Vezina Trophy. No goalie has ever won the Vezina as a King. Is this Quick’s year?