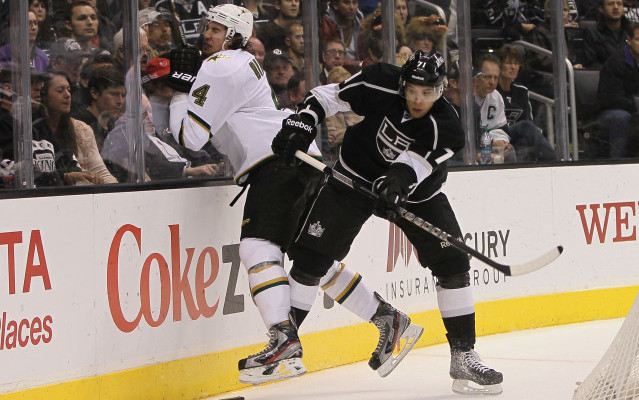 The good: Nolan remained with the big club for the entire year and was a regular season lineup mainstay. Through his 44 games he did as many energy line right wings do: he fought, he forechecked, he provided energy, he used his size and chipped in with the odd point or two.

He also showed a keen sense on when to drop the gloves. Los Angeles tied the game 12 seconds after this bout with Sheldon Souray and eventually beat Anaheim on February 25:

A sturdy open-ice hitter, he was usually good for one of these per game:

-remember this event; don’t ever expect to see another Jordan Nolan-Wade Redden scrap

Nolan also has powerful strides that provide some deceptive speed for someone of his size and physicality. He ranked fifth amongst L.A. forwards in the nebulous category of “hits,” logging 72 over his 44 games.

The bad: Nolan occasionally strayed from his north-south role, and when he did, his ice time suffered.

Darryl Sutter, on Jordan Nolan’s return to the lineup in a March 21 loss to Dallas:

The fourth line gave us a little bit of juice. We just want him to get that – it’s not confidence – but it’s got to the point where he was turning too many pucks over on the boards coming out of his own zone, and then it affected his lack of time spent in the offensive zone. We just kind of go game-to-game with him. We need two or three more minutes out of the line, and I don’t like splitting them up. He’s got to play the right wing. He’s not as good on the left side. We need two or three more [minutes]. It doesn’t sound like much, but in the course of the game, it’s like four shifts, if you look at last night. And it’s the schedule – it is the schedule, and how top guys play. If you look at Kopitar’s line last night, they probably played two or three minutes too much, and that’s not because they were doing anything great as a line. They’ve had a hard time, but that’s partly my fault because I’ve played them more than I should, and that trickles down to the guys below them. It’s not so much Jordan, it’s just the group [and] how it spreads out.

Though he appeared in 44 of 48 regular season games, Sutter used him in only seven of 18 postseason games and at times chose to play Alec Martinez (as a seventh defenseman) and Tanner Pearson (once, for his NHL debut) instead of Nolan. Nolan’s ice time dropped 53 seconds from 2011-12 to 2012-13, which related to Sutter’s quote above and the fourth line’s general decline in effectiveness from the season prior. As mentioned above, Nolan and his linemates did not see the preferred amount of offensive zone time despite matching up consistently with the other team’s energy lines and often opening shifts in the offensive zone; as Jewels From The Crown noted, Nolan’s possession metrics and net shots-on-goal totals were poor. He took .52 shots per game, the lowest average amongst Kings forwards.

Going forward: Considering Nolan was selected in the seventh round in 2009, the Kings hope to continue to get good mileage out of the crash-and-bang right wing who recently signed a two-year extension upon the conclusion of his entry level contract. At $700,000 per season, there’s some value inherent there if Nolan is able to return to his 2012 effectiveness in serving as a role-playing power forward that Sutter is comfortable to use in a wider variety of situations. He’s 6-foot-3, 225 pounds and possesses a quality shot from close range when afforded some space, and as a player who turned 24 last month, there’s still time for Nolan to put all of his attributes together. As long as he continues to work pucks deep while maintaining his physical, north-south game and avoiding untimely minor penalties – facets of his game that were inconsistently applied in 2012-13 – he’ll serve as a useful role player that fits the Kings’ methods well.