Defenseman Jake Muzzin has avoided arbitration by signing a two-year contract with the Kings.

Muzzin, 24, has shown steady improvement between junior and professional hockey. His point total increased in every season with the Soo Greyhounds, and in 2010 he won the Max Kaminsky Trophy as the OHL’s most outstanding defenseman.

The 6-foot-3, 215 pound defenseman utilized a heavy slapshot to go with a precise wristshot in posting 16 points (7-9=16) over 45 games in earning regular ice time with the Kings in 2012-13. He was clearly at his most productive when he logged 11 points (4-7=11) while paired primarily with Drew Doughty in March. In a five game span from March 5 to 12, he recorded three goals and four assists, though his highlight offensive play of the season was clearly the look-off that faked Saku Koivu out of his skates in a 5-2 win over Anaheim on February 25:

There were also hiccups in his own zone during the playoffs, especially early in the St. Louis series. Muzzin battled through some defensive inconsistencies and gradually improved in the spring while appearing in all playoff games except for Game 2 of the Western Conference Final. He logged upwards of 20 minutes of ice time in 10 of the 18 games prior to Robyn Regehr’s arrival, and in five of 29 games (including playoffs) after Regehr made his debut on April 4.

Alec Martinez, Trevor Lewis and Jordan Nolan remain unsigned RFAs who will head to arbitration if they are unable to come to an agreement on a contract extension with the Kings. Kyle Clifford is also a restricted free agent. Dustin Penner is the team’s lone unsigned UFA, though it does not appear the Kings have the necessary cap space to be able to offer him the type of contracts other teams are able to.

The Kings now have 20 players under contract for 2013-14 with 4.2 million dollars of cap space available. 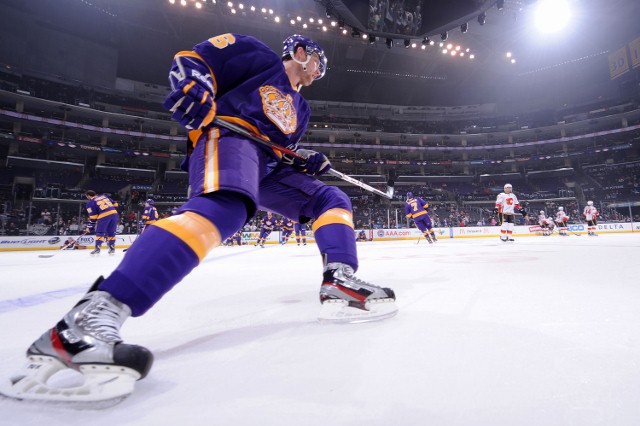