Important off-season lies ahead for Toffoli 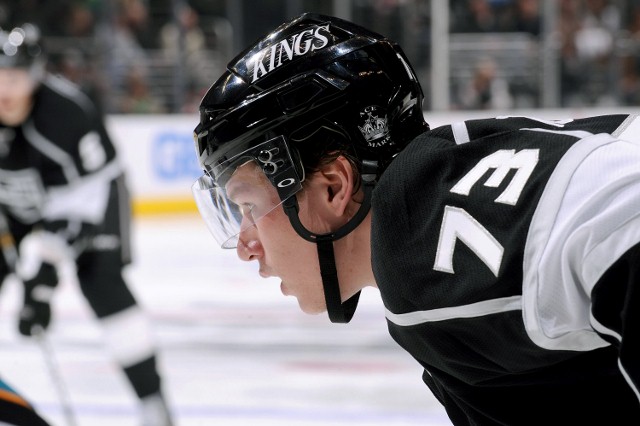 Finding consistent production from the left wing has been a work in progress for much of the last three seasons. Dustin Brown’s successful transition from the right to the left side two years ago has provided a shot in the arm, but other left wing options haven’t exactly formulated the level of consistent contribution required to have a positive impact amongst the team’s top-six forwards.

And then there is Tyler Toffoli, a 21-year-old who played a lot of center in his formative minor hockey years before developing into a highly regarded NHL right wing prospect and earning the AHL’s Rookie of the Year award in his first full professional season. Considering Justin Williams and Jeff Carter occupy the top two right wing spots, and Trevor Lewis, a restricted free agent, has emerged as an effective forechecking and speed option to the right of Jarret Stoll, Darryl Sutter previously acknowledged that Toffoli would “have to be a more versatile player in terms of position-wise” in his bid to earn a regular spot in the Kings’ lineup.

In other words, there does appear to be an effort over the summer and come training camp to get Toffoli more acclimated to playing on the left side.

“I think that’s something that’s up to them,” Toffoli said. “Wherever they put me, I’ll play and play the most I can. So I think we’ll see what they say and we’ll see what happens next season.”

Darryl Sutter wasn’t as forthcoming on Monday as he was earlier in the season about a proposed position switch for Toffoli when he noted that the most important development in Toffoli’s game would be for him to fill out in his bid to fully withstand the rigors of an 82-game season.

Toffoli rarely played on the left side in his early NHL looks, though his first career goal was scored on the left wing side of goaltender Mike Smith while on the power play in a 4-0 win over Phoenix on March 18.

Goals are Toffoli’s calling card – he scored 163 of them over 252 games with the OHL’s Ottawa 67’s and added 28 of them with the Manchester Monarchs in his 58-game AHL campaign this year – though one aspect of his game that impressed the coaching staff and his teammates was his ability to handle his own in NHL board battles after being recalled. “The one thing that stands out with Toffoli for me is his willingness to battle it out along the walls,” Dustin Brown said during the conference finals.

“I just think since I was drafted, that’s one thing that Dean and everybody really told me to get better at,” Toffoli said of his boards play. “I think just throughout the years I’ve been working on it and it’s a big area that they want you to compete and they want you to win every time, so that’s just what I try to every time I go out there. If you’re winning puck battles along the boards, you’re going to create offensive chances and I think you can tell – not from myself – but our whole team in general, we win a lot of puck battles on the wall and it creates a lot of goals for.”

In addition to Toffoli adding size and furthering his strength and endurance, Sutter also referenced a mental aspect of being able to withstand the rigors of battling the ups and downs of a full NHL season. Considering the mostly positive experience in his first exposure to the highest level of play in the world, Toffoli is ready to confront that challenge directly.