Championship ring, dinner with Luc up for auction 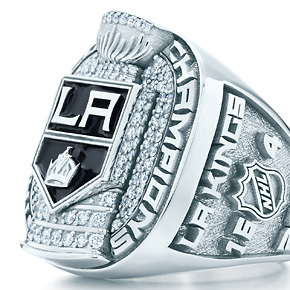 This ring is the real deal: it is the ring that the players were presented with and that you may have seen decorating the hands of Bob Miller and Jim Fox on FOX Sports West broadcasts. Crafted out of 14k white gold and cut diamonds, it will be personalized with the engraving of the winning bidder’s name. It is not for sale anywhere.

-Also up for auction is an opportunity to join Hall of Famer and Kings President, Business Operations Luc Robitaille for dinner in the Lexus Club prior to the Saturday, April 27 game against the San Jose Sharks. Included in this package is a pair of lower level tickets to that night’s game as well as a 2012-13 team-signed L.A. Kings jersey.

To bid on the dinner with Luc Robitaille, click here.

About City Year:
City Year is an education-focused, nonprofit organization founded in 1988 that partners with public schools and teachers to help keep students in school and on track to succeed. In 24 communities across the United States and through two international affiliates, this innovative public-private partnership brings together teams of young AmeriCorps members who commit to a year of full-time service in schools. Corps members provide individual support to students who need extra care and attention, focusing on attendance, behavior, and course performance through in-class tutoring, mentoring, and after school programs.